Pakistan Stock Exchange witnessed yet another historic trading day on Thursday after its daily trading volume crossed the 2-billion mark for the first time ever, just a day after it created a new record volume of 1.56 billion shares.

However, the benchmark kse-100 index fell flat by the closing bell as investors treaded cautiously ahead of the Monetary policy meeting due to be held on Friday.

On Thursday, the index clocked at 46,790.75 level after losing about 21 points by the closing bell, as the Index oscillated between negative and positive territory throughout the session.

Right after the opening bell the index climbed nearly 300 points to touch intra-day high of 47,204 points, however the index witnessed strong resistance around 47,000 level, thus by the closing hour, massive profit-taking by the cautious investors dragged down the index-paring all the early gains to touch intra day low of about 46,675 points.

Irfan Saeed, Senior Vice President, BMA Capital Management Limited, said that Market showed strong resistance around 47,000 level, thus it was natural to expect some selling pressure and profit taking at this level. But, Mr Saeed noted that another day of record volumes was a result of excitement that was created by MSCI rebalancing, which resulted in heavy flows into Oil and Gas Development Company (OGDC), which was deleted from its list, while Lucky Cement, TRG Pakistan Indus Motors and National Bank of Pakistan also attracted heavy flows during the day.

However, the historic volume at the bourse was led by huge trading activity in the WorldCall Telecommunication Limited, which single handedly recorded a volume of 950.27 million shares- contributing about 50 percent of the total market volume. Moreover, Hum Network Limited also led the volume chart with 172.57 million shares.

During the session Market Capital decreased by Rs.30.80 billion, while total value traded increased by 14.50 billion to Rs.42.84 billion.

During the session, sectors which lifted the index were Technology & Communication with 45 points, Investment Banks and Securities with 23 points, Commercial Banks with 13 points, Cement with 12 points and Paper & Board with 4 points.

Among the scrips, the most points added to the index was by TRG Pakistan which contributed 46 points followed by Lucky Cement with 30 points, Habib Bank Limited with 23 points, Dawood Hercules Corporation Limited with 17 points and Kohinoor Textile Mills Limited with 8 points.

However, sectors which dented the index were Fertilizer with 29 points, Tobacco with 21 points, Automobile Assembler with 19 points, Oil & Gas Exploration Companies with 14 points and Engineering with 13 points.

Among the scrips, the most points taken off the index was by Pakistan Tobacco Company Limited which stripped the index of 21 points followed by Fauji Fertilizer Company with 18 points, Millat Tractors Limited with 16 points, Muslim Commercial Bank with 14 points and Bank Al Falah Limited with 12 points. 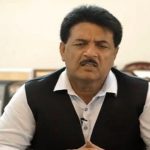