Who wears the PML-N trousers? 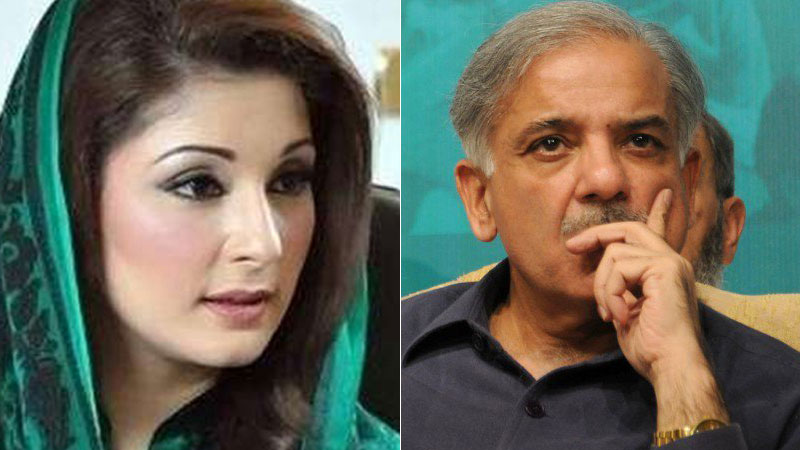 Regardless of who lives at the palatial Jati Umra estate, the well-guarded fort of the PML-N has been home to a deafening silence for decades. Not a single tidbit of gossip about Sharif family dynamics has ever escaped those thick walls.

However, the cracks began to appear in the facade earlier this week. A journalist asked what PML-N Vice President Maryam Nawaz thought about her uncle and leader of the Opposition in the National Assembly hosting a lunch for opposition parliamentarians. That question was met with the fierce response that it was just lunch and nothing more.

The news-hungry media got the wind of the smoke billowing from behind the walls of Jati Umra. Maryam swiftly tried to put things right, explaining that the entire Sharif clan was on the same page on all issues. However, no one was listening.

“Of course, the family is not on the same page, especially in their approach to the PPP,” says Ahsan Raza, a journalist based in Lahore.

“The Maryam-led faction of the PML-N is not ready to accept the PPP as an opposition partner in the Senate. Her senators do not follow the Opposition leader, Yousaf Raza Gilani. They have formed their own opposition group. Shehbaz Sharif hosted a dinner for the PPP parliamentarians to test the troubled waters of the family. The coming days are really important.”

Maryam has minced no words in trying to outshine Shehbaz and lower his profile.

Before Shehbaz’s release from prison last month, Maryam was the only PML-N star. Yet once out of NAB custody, Shehbaz started plotting his comeback to the political scene by meeting diplomats and opposition leaders. He hosted a dinner reception for major opposition parties in Islamabad on the pretext of uniting the opposition on a single platform to oust the incumbent PTI government. However, the younger Sharif was determined to revive the PDM (Pakistan Democratic Movement) the opposition alliance, which lost its steam and firepower after differences emerged between the PPP and the other parties over resignation from assemblies, and nomination of Senate opposition leader.

The PPP saw the dinner as opportunity to gel with Shehbaz and poke the firebrand Maryam and her camp. Bilawal House sent a three-member delegation consisting of two former primer ministers – Senator Yousaf Raza Gilani and Raja Pervaiz Ashraf – and Senator Sherry Rehman. The ANP, which publicly accused the PML-N and the JUIF of squeezing them in the alliance, also tagged along. PPP Chairman Bilawal Bhutto-Zardari and JUI-F Emir Maulana Fazlur Rehman were both conspicuous by their absence. But it was Maryam’s non-show that was the talk of the evening.

To settle the score, the Maryam camp convened a meeting of the PDM, minus PPP and ANP soon afterwards, which remained a lacklustre affair. To dilute Shehbaz’s efforts to revive the PDM, former prime minister Shahid Khaqan Abbasi, a Maryam camp comrade, told a TV channel that if the PPP and ANP were accepted back into the PDM, he would resign from his post as the alliance’s secretary general.

Neither Shehbaz nor Maryam has any sort of soft spot for the PPP, but both Sharif scions are using the PDM platform to bury each other alive. If Shehbaz succeeds in bringing the PPP back to the PDM fold, he will emerge as a new kind of leader, which Maryam cannot bear.

Shehbaz has chosen not to respond to his niece’s snub. He has long waited to be crowned PMLN King, all the while standing silently behind his charismatic elder brother Nawaz Sharif. When things were swinging in his favour, Nawaz Sharif chose Shahid Khaqan Abbasi over Shehbaz for the prime minister’s office in 2017. Later on, he put forward his daughter as his potential successor making Shehbaz a Pakistani version of Prince Talal of Jordan, who despite being a crown prince for decades was cornered by his own elder brother, King Shah Hussain.

In monarchies, blood is thicker than water. As the PML-N is an established monarchy in the name of democracy, the real king has made Shehbaz a fall guy. Maryam will rule the PML-N roost. The fight is ongoing and Nawaz Sharif will have to act as moderator. The final decision rests with the London league. Yet it doesn’t have to come to this. Not if Shehbaz finally develops some backbone. Determining unity of command is the only way to save his political capital. He must make himself seen and not heard. Not least by the elder Sharif, who glory days are long gone. Nawaz must play the final card. It will be his last hurrah.