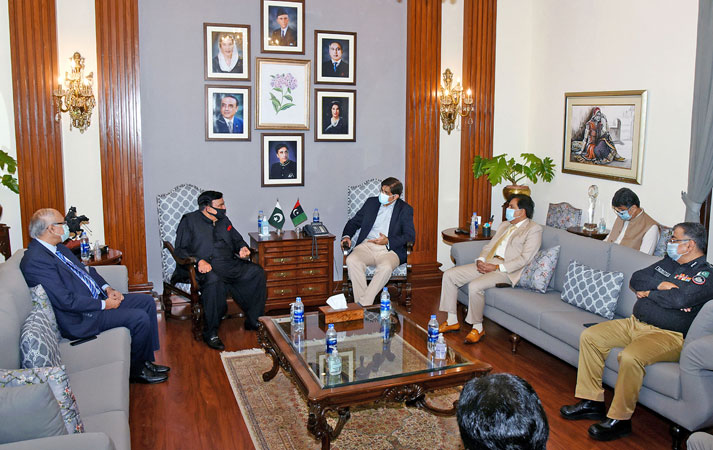 Interior Minister Sheikh Rasheed Ahmed on Thursday said that the Federal and Sindh governments have agreed to work jointly for elimination of dacoits from the katcha areas of Larkana and Sukkur – Sindh.

Addressing a crowded press conference at a hotel here, the Interior Minister referred to his latest meeting with Sindh Chief Minister Syed Murad Ali Shah and said that the Center will extend all out support to the Sindh government to eliminate dacoits from katcha areas of Larkana and Sukkur divisions.

He said that the objective of his present visit to Karachi is to submit a report to the Prime Minister about the prevailing situation.

Sheikh Rasheed informed the newsmen that he held meetings with the heads of the concerned departments including Sindh police, Rangers, Sindh chief minister and Governor of Sindh. The law and order is a provincial subject and if the Sindh government demands, the Rangers can be provided for the entire Sindh, he said and added that the provincial government may deploy Rangers as per its requirement.

Sheikh Rasheed Ahmed rejected the reports about imposition of Governor Rule in Sindh and said the Federal government will extend support to the Sindh government to maintain law and order because it is a provincial subject under the 18th Constitutional Amendment.

The Interior Minister said that the establishment of lasting peace is a common objective of both Federal and Sindh governments because human lives are precious. The Rangers will extend all out support to the Sindh police to eliminate the dacoits from the katcha area, he noted.

Sheikh Rasheed Ahmed said that cases will be registered against the bandits involved in terrorism, kidnapping for ransom and killings, under the sections of anti-terrorism law.

Sheikh Rasheed said that the previous operation against the dacoits in katcha areas was not well planned.

He said that he has also met with Sindh Governor Imran Ismail and the members of the Sindh Assembly belonging to the Pakistan Tehreek-e-Insaaf (PTI).

To a questioner, the Interior Minister expressed confidence that the present PTI-led government will perform better in its five-year tenure and Imran Khan and PTI will try to win the next general election.

To another question, the Interior Minister said that legislation is being carried out on the matter of missing persons and it would be presented in the National Assembly.

He said that the law and order situation in Karachi is much better as compared to the past and the prevailing situation in the metropolis does not require operation.

To another question, the Interior Minister said that stern action would be taken against the corrupt elements in the National Database and Registration Authority (NADRA).