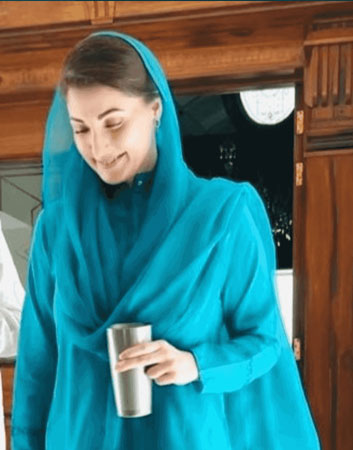 PML-N leader Maryam Nawaz has revealed the reason why she does not drink lassi-and it has divided social media into two camps: the drinkers and the non-drinkers.

“Are you drinking lassi, ma’am?” a follower asked, sharing a photo showing Maryam holding a steel glass which is normally used for lassi “I wish I could have it every day but I have to watch my weight, so coffee only,” Maryam said.

Another follower tweeted that being a Lahori and not drinking lassi is a “crime”, to which Maryam responded with a helpless face emoji: “Isn’t it?”

Some people took it as a beauty tip and others suggested Maryam drink pheeki lassi that has less sugar and yogurt, and more water and salt. Here are some of the best responses to her revelation. Maryam expressed her fondness for chilled drinks in 2013 as well. “A chilled Diet Coke is one of the most delectable treats. Addicted to the tang.”