Representation of an unfinished life 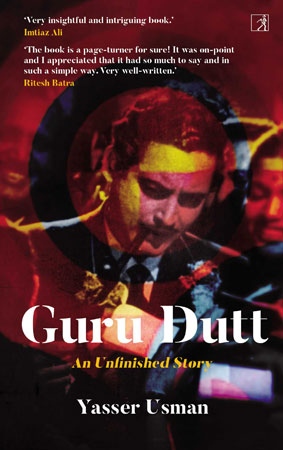 Life seems to be at the end when your most awaited book is read or anticipated movie is watched. Everything seems dull after that. Then the deprived soul of an individual only revives those moments by remnants. The same turmoil and tribulation occurred to me when the book Guru Dutt: An Unfinished Story by Yasser Usman, on the life of a person much ahead of its time, was released this year and read by me within three days.

In three days because length of that biography is short, just like the life of Guru Dutt. In short span of his career, Guru Dutt made phenomenal movies, depicting the suffering of individual, who are not hypocrites and showed true face of cruel society. His characters were depressed poets, unemployed persons, cartoonists, taxi-driver and the director at verge of his downfall. After reading that book and reliving the moment of troubled soul of Guru Dutt Sahab, I felt empty from within.

Bestselling biographer Yasser Usman’s Guru Dutt: An Unfinished Story, quotes extensively from books including Ten Years with Guru Dutt: Abrar Alvi’s Journey by Sathya Saran, Guru Dutt: A Life in Cinema by Nasreen Munni Kabir, My Son Guru Dutt by Vasanthi Padukone, Conversation with Guru Dutt’s Sister Lalitha Lajmi and other articles. As author puts it that, “There is not even a single direct interview of Guru Dutt. The media coverage on him was almost zilch while he was alive. This despite the fact that he made commercially successful films.” Guru Dutt was a man of few words, whose brilliance was celebrated and revered by viewers and critics but only after his death; just like a scene straight out of his films.

The book is divided into 15 sections – with the title Building of a Dream & Destruction of a Dream. The concluding part is called 1964, the year Guru Dutt died of overdose, after consuming sleeping tablets and alcohol at the age of 39. “I know that he had always wished for it, longed for it, and he got it”, wrote Waheeda Rehhman on Guru Dutt’s death.

Guru Dutt, was an Indian filmmaker, producer and actor, born on 9th of July 1925, who created classic masterpieces – Pyaasa, Kaaghaz Ke Phool and Sahib Bibi or Ghulam – in his early thirties was inspired from Orson Welles, who directed Citizen Kane at the age of 26.

The book is divided into 15 sections — with the title Building of a Dream & Destruction of a Dream. The concluding part is called 1964, the year Guru Dutt died of overdose, after consuming sleeping tablets and alcohol at the age of 39

The name Guru Dutt transport our thoughts to one of the depressing songs “Jane Wo Kaise Log Thy Jin K Pyar Ko Pyar Mila” penned by Sahir Ludhianvi, composed by SD Burman in the voice of Hemant Kumar from the movie Pyaasa and also his ‘crucifixion shot’ with the background of huge library.

Guru Dutt had a unique style in picturisation of songs. His songs commenced without the introductory music. A character would be talking and within a next moment he would be singing. It became his signature. Majrooh Sultanpuri noted that ‘Many people copy him but he was first to make the song visually interesting. His greatest talent was his consistency. His song was always on a higher level, they had impact. He gave them much thought, he’d spend nights thinking of songs situation’. His songs usually had a different location, usually in which a character abides. ‘Kabhi Aar Kabhi Paar’ was performed under scorching sun beam near a construction site, next to a broken car. ‘Sun Sun Sun Zalima’ was filmed in garage. Rhythm in his song sequences was spellbinding. The long tracking shots with smooth camera movements, intelligent play of light and shades, poetic silhouettes and the wonderful use of close-ups, all these were trademarks Guru Dutt elements.

Guru Dutt was known as a man much ahead of his time, and because of being born in the wrong era, where no one else was to understand his class, intelligence, brilliance, cinematic style, and direction; he chose death instead of life. He said, “I’m not afraid of death but scarred for life. I think its fear of being alive.” In his troubled mind, life might have felt more difficult than death. It was easier for him to die than to live. And the easiest way to embrace death for him was by committing suicide. After two unsuccessful attempts, he rested in peace.

Remnants of his life can be captured from the movies he made, especially from the movie Pyaasa, in which he depicted the posthumous fame of a poet trying to achieve success in a hypocritical, uncaring world when alive. Pyaasa starts brilliantly – a man lying down at grass, staring at the sky and the flowers. A bee starts buzzing over a flower and then, moves down to the grass. The scenario is narrated with poetry in the voice of Muhammad Rafi, “Ye Hanste howe Phool, Ye Mehka Howa Gulshan, Ye Rang mai or Noor mai Dubi Howi Raahen. Ye Phoolon ka Rass Pee Kay Machalte howe Bhanwre.” The smile on the poet’s face is broken as a man’s boot uncaringly tramples the bee. And the poetry goes, “Mai Doon bhi to kya Doon Tumhe Aye Shokh Nazaaro, Lay De Kay Mere Pass Kuch Ansoo hain Kuch Aahen”. That more or less was the theme of the film. The uncaring attitude of the society where the struggling ones are trampled over mercilessly. Laced through this is the whole romance triangle with one lady dumping her lover for a well-to-do businessman for the sake of money, and a prostitute who loves the poet truly. “Pyar Karty Hain Shouq K Liye, Or Baich Dete Hain Aram K Liye”. Pyaasa came at a time of dissatisfaction and soul-searching as the new socialist, secular India struggled to find her footing. It presents a very bleak picture of greed and corruption, and yet there is a small beacon of hope for understanding, for good to find a way to continue, for equality to stand against injustice, hope for the future. Pyaasa is considered one of the greatest films in Hindi cinema history, especially the poetry, “Jinhen Naaz hai Hind Par Wo Kahan Hain” that criticizes its people, government and heroes.

Remnants of his life can also be captured from his another miserable flop movie, also a reason to leave the direction forever, Kaaghaz Ke Phool, a story about a director whose career goes downhill, loses everything and dies. This semi-autobiographical story of a tragic love affair set against the backdrop of the film industry was deemed too morbid for the audience to swallow and went right over audience’s heads. Although in later years the film received critical acclaim for its cinematography and has gained a cult following, Dutt, who had put his soul into the film, was devastated over its failure and never directed another film. “Dekhi Zamane Ki Yaari, Bichde Sabhi Baari Baari”

“The line between real and reel kept gradually blurring till it reached a point when the thin line vanished. Where Reel become Real with his death.” These two movies are about an artist who chose death over a society in which no one cares for him or his desolation. Guru Dutt made other films too that were highly entertaining with lovely songs and deft little touches, and many of his film projects were scrapped because he was unsatisfied with the results. One of those films that he scrapped and wasted much amount of money was Gouri, in which the role of lead actress was given to Geeta Dutt, a singer and wife of Guru Dutt.

Yasser Usman has showered the book with many poignant remembrances from Guru Dutt’s sister, the artist Lalitha Lajmi. There are a bunch of photographs in the book including the famous Pyaasa shot, baby Guru Dutt, Guru Dutt with family, Guru with Bimal Roy, shot from Love and God, and some of his letters and post cards to his sister and mother make for fascinating reading. Most depressing and eye-tearing photograph was of K Asif – the director of Mughal-e-Azam who also was working on his next magnum opus ‘Love and God’ with the lead actor Guru Dutt as Majnu – paying his last respect to Guru Dutt at his funeral. K.Asif had come to see his friend’s face for the last time, ‘I won’t be able to sleep if I don’t see his face’. K Asif rushing through the crowd bends down over the body of Guru Dutt and lovingly touched his cheeks and said to Raj Kapoor, ‘How innocent he looks, as he were only asleep’.

The book has interesting and as well as depressing pieces. Yasser Usman has reconstructed a mesmerizing tragic story of Guru Dutt in vivid language and with short chapters. To summarize, the book chronicles the aspect of Guru Dutt’s troubled journey, turbulent marriage with singer Geeta Roy, his confusing relationship with Waheeda Rehman, his forever lasting friendships with actors Dev Anand, Johnny Walker, writer Abrar Alvi, cinematographer VK Murthy, composer OP Nayyar, also much trivial information about his movies, his struggles with depression, alcoholism, sleeping pills and demolition of his dream house at Pali Hill.

His death was an irreplaceable loss to Indian cinema. And it was a tragic twist of fate that his films, most of which were discounted in his life-time, would be regarded as cult classics after his death.

The book is meticulously researched and stirring representation of an unfinished life. It covers extraordinary journey of a genius, rich and famous person going through emotional and mental health. The author has also subtly put the sentences in Urdu, so the readers can feel the emotions, and torment felt by Guru Dutt at his time of depression.

The article has been written and contributed by Saqlain Soomro. He can be reached at saqlainali878@gmail.com