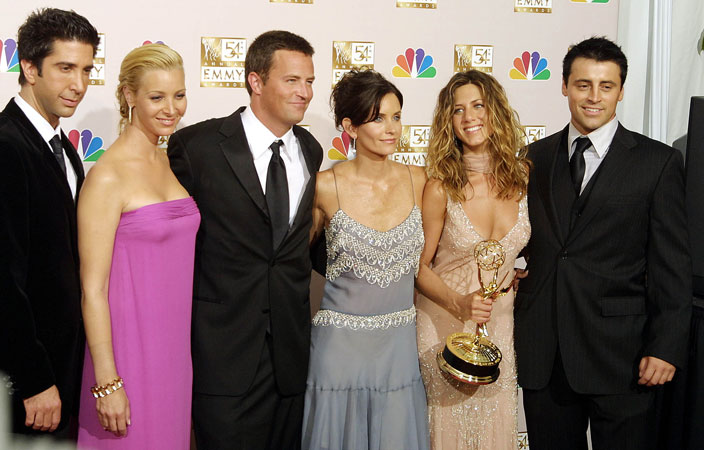 The stars of “Friends” never really left us — they were simply on a break. The cast of the beloved 1990s sitcom about six attractive, straight, white New Yorkers with ludicrously giant Manhattan apartments finally reunite Thursday for a much-hyped and long-delayed special.

Details are under wraps, but fans can expect a “table read” of a classic episode, a recreation of the famous “Friends” quiz at Monica and Rachel’s apartment – and lots of hugs, tears and reminiscing.

“Where’s the tissue box?” asks an emotional Jennifer Aniston in a trailer that shows the gang reflecting on their ascent to stardom and firm real-life friendship. “I love you guys so much,” she adds during a group embrace.

Their bond continues to be a profitable one.

In a sign of the show’s enduring appeal, the gang are reportedly pocketing $2.5 million each for the reunion.

Details are under wraps, but fans can expect a ‘table read’ of a classic episode, a recreation of the famous ‘Friends’ quiz at Monica and Rachel’s apartment — and lots of hugs, tears and reminiscing

But filming was delayed by the pandemic, with producers determined to bring the gang back in-person to iconic sets like the “Central Perk” cafe at the show’s original studio outside Los Angeles.

“We wanted to do it a year ago, give back to everyone — to all the fans, especially in the dark times we were all experiencing,” said Schwimmer in a recent interview.

“Hopefully, a year later, people will still enjoy it.”

“The One Where They Get Back Together” airs 17 years after the show’s finale drew more than 50 million viewers, each desperate to find out whether on-again-off-again Ross and Rachel would end up back together.

Thanks to re-runs and now streaming, the show’s appeal has crossed generations, with viewers too young to remember its original run still quoting catchphrases like “We were on a break,” “How you doin’?” and “Pivot!”

“No matter what time of day, where you are in the country, what kind of television service you have — chances are, you can still access an episode of ‘Friends,'” said Nick Marx, Colorado State University film and media studies associate professor.

Like “Frasier” and “Seinfeld,” “Friends” is one of “maybe four or five American sitcoms” from the “last real golden age of broadcast” with truly expansive appeal, in contrast to today’s “fractured” TV marketplace, he added.

Still, while its depiction of urban life centred around coffee houses and the latest “Rachel haircut” was once seen as modern, the show’s overall lack of racial diversity was slammed by some critics even during its run.

And storylines now seen as fat-shaming or transphobic have been called out, particularly by some younger viewers.

“Many critics have observed the absurdity of the ‘New York City’ the characters inhabit — from the luxurious apartments they could never afford to the overwhelmingly white milieu they live and work in,” said Alice Leppert, Ursinus College associate professor of media. But “sitcoms as a genre are traditionally reassuring,” she added.

British comic James Corden will host the reunion, interviewing the cast in front of the giant fountain on the sprawling Warner Bros Ranch used in the show’s famous opening credits.

Returning guest stars will include Tom Selleck, Reese Witherspoon, and Maggie Wheeler – better known the world over as the perennially shocked Janice.

From outside the “Friends” universe, celebrities including Justin Bieber, David Beckham, Lady Gaga and K-pop sensation BTS will drop by.

“”‘Friends’ has been everything to me,” said fan Joyce Blackwell, gathered outside the show’s famous Manhattan apartment building this week, ahead of the special. “There’s no other show like it,” she added.