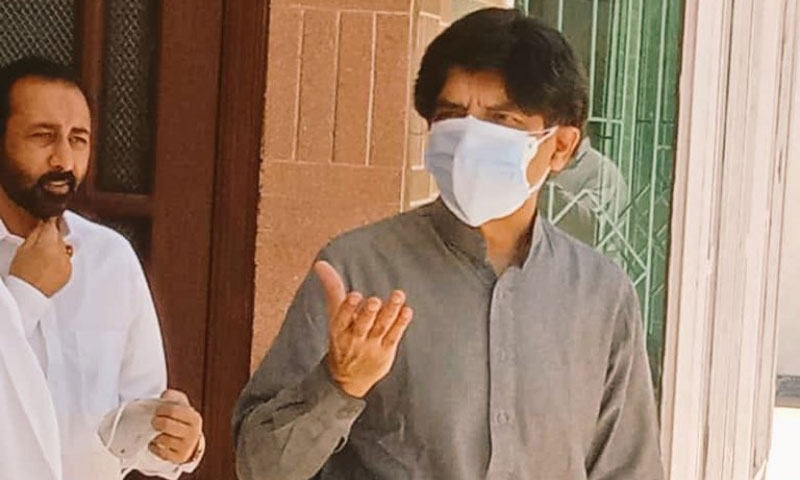 Estranged PML-N leader and former interior minister Chaudhry Nisar Ali Khan took oath as member of the Punjab Assembly on Wednesday after the Assembly Secretariat found no stay order against him to formally become an MPA.

He was administered the oath of office by Punjab Assembly Deputy Speaker Sardar Dost Mohammad Mazari. Khan, and entered the Assembly through government chambers. Speaking to reporters outside the Assembly, he said he would undertake a visit to Lahore again soon during which he would hold detailed talks with media persons. When he was asked which political party he would join, he answered: “I am not going [to any party] yet.”

Khan had been elected from Punjab Assembly’s constituency PP-10 (Rawalpindi-V) in the 2018 general elections as an independent candidate with a margin of over 34,000 votes, but did not take the oath alleging rigging that led to his defeat in the National Assembly’s constituency NA-59 (Rawalpindi-III). The assembly session started one hour 51 minutes later under the chair of acting speaker Sardar Dost Muhammad Mazari. Earlier, during a heated debate on agriculture in Punjab Assembly both opposition and treasury benches blamed each other for not fighting the case of Punjab’s water share.

PML ( N) leader Sheikh Allauddin said that Punjab always rendered graet sacrifice and gave its share of water to other provinces, but they always blame Punjab for stealing their share of water. He questioned who will fight the case of Punjab.

While speaking on the floor of the house, Agriculture minister Sardar Mohsin Laghari invited the Sindh government to inspect water discharge from Punjab’s barrages and find a solution together. He said that the main reason for the water crisis in Punjab and Sindh was the 1991 agreement, adding that water was not distributed keeping in mind the actual statistics.

Addressing the session of Punjab Assembly Provincial Minister for Law and Cooperatives Raja Basharat said that the attitude adopted in the Sindh Assembly on water distribution was regrettable in all respects. He said that a positive and healthy attitude should be adopted on such national issues, and they should be resolved through mutual consent and dialogue. He said that whatever happened in the Sindh Assembly against Chairman IRSA and attempts made to bring him under pressure is unacceptable,and the Punjab Assembly condemns such negative attitude. Raja Basharat proposed to the opposition that a parliamentary committee of the Punjab Assembly should unanimously be formed which would work with the parliamentary committee of the Sindh Assembly to remove such misunderstandings and present Punjab’s position in a positive manner.