Army tells Kabul to ‘deny space to spoilers of peace’ 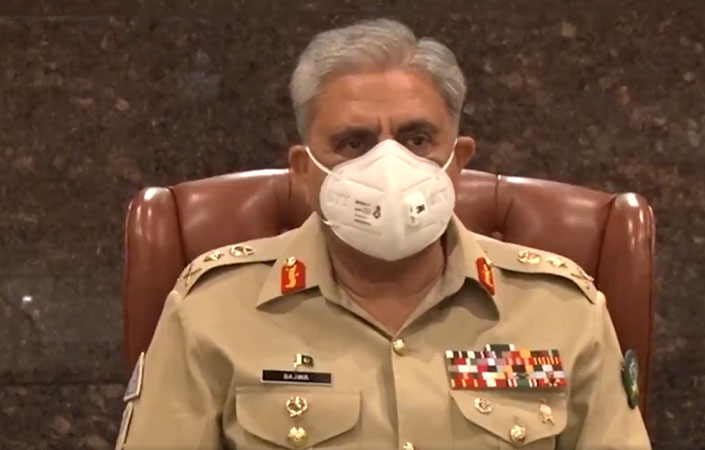 Taking serious note of the recent cross-border firing incidents from Afghanistan and regrouping of terrorist leadership and outfits across the border, the army top brass expressed the hope that Afghanistan’s soil will not be used against Pakistan, a press statement issued by the Inter-Services Public Relations (ISPR) said. It was noted that in light of emerging regional security situation, Pakistan has taken effective border control and management measures, and the same is expected from Afghanistan to deny any space to the spoilers of peace, the ISPR added.

The commanders undertook a comprehensive review of the global, regional and domestic security environment with particular focus on the situation along the borders especially the Line of Control/Working Boundary and Pak-Afghan border, the ISPR statement said. While reviewing recent developments in the Afghan peace process and its attendant effects on the security situation, especially along the Pak-Afghan border, the forum reaffirmed Pakistan’s support for regional peace and stability.

The meeting was apprised of the evolving operational imperatives and corresponding strategy to meet upcoming challenges. Gen Bajwa expressed satisfaction over Army’s operational readiness in view of the emerging security threats, the ISPR said.

The commanders’ review comes three days after a Pakistani soldier was martyred in an exchange of fire with Afghanistan-based terrorists in North Waziristan tribal district. Pakistan has consistently asked Afghanistan to ensure effective management and control on its side of the Pakistan-Afghan border. Such attacks are common as earlier in the second week of May, a soldier was injured after militants opened fire from across the Afghan border on a military check-post in the Bajaur district of Khyber Pakhtunkhwa.

The top military brass also reviewed the situation in newly merged districts of KP and Balochistan and stressed upon “fast-paced socio-economic development of these areas to capitalise on the hard-earned peace to bring an enduring stability”, according to the statement.

During the meeting, the army chief appreciated the formations for all-out support to the civil administration during the ongoing third wave of Covid-19 which he said had contributed in bringing significant reduction in spread of the pandemic and controlling its adverse effects.

Earlier this month, Army Chief Gen Qamar Javed Bajwa had offered Pakistan’s support for the Afghanistan peace process in a meeting with President Ashraf Ghani in Kabul amid growing violence as the United States withdraws its troops. During the one-day visit, the army chief was accompanied by Director General of Inter-Services Intelligence (ISI) Lt Gen Faiz Hameed. Gen Bajwa had reiterated to Ghani that “a peaceful Afghanistan means a peaceful region in general and a peaceful Pakistan in particular. “We will always support ‘Afghan led-Afghan owned’ Peace Process based on mutual consensus of all stakeholders,” he had said.

Matters of mutual interest, current developments in the Afghan Peace Process, enhanced bilateral security and defence cooperation and the need for effective border management between the two countries were also discussed during the conversation. “Afghan president thanked COAS for a meaningful discussion and appreciated Pakistan’s sincere & positive role in Afghan Peace Process,” an ISPR statement issued at that time had said.

During the visit, Gen Bajwa was also accompanied by British Chief of Defence Staff Gen Nicholas Patrick Carter. Britain still has troops in Afghanistan in a war that started with the overthrow of a Taliban government following the 2001 attacks by militants in the United States.