Pakistani superstars take a stand for peace in Palestine 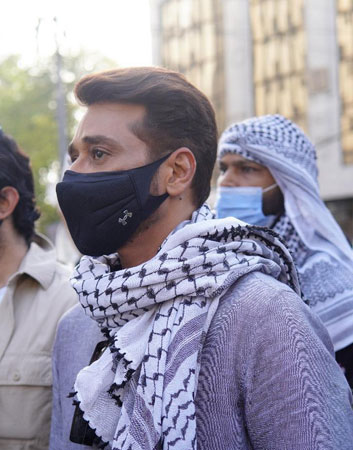 Over the past week, news about Palestine and Israel has been unavoidable. The ongoing Israeli occupation in Palestine which has been raging for 73 years continued to take its toll on innocent civilians. From forced evictions in Shaikh Jarrah to the Al-Aqsa mosque attacks during Jamat prayers in the month of Ramadan to over 1,000 bombs killing citizens including children, the world knew that enough was enough. Videos of Israeli police intervention and attacks on faultless civilians including children flooded social media and captured the attention of people worldwide. What was unavoidable to notice in this situation was the complete imbalance of power between Palestine and Israel in general. Seeing these incidents occur, several renowned Pakistani celebrities spoke out and condemned the violent acts for the inherent injustice Palestinians are facing today. A-listers including Faysal Quraishi, Mahira Khan, Ayesha Omar, Farhan Saeed, Asim Azhar, and several others spoke up against the inhumanity of it all.

In response to the first Al-Aqsa mosque attack, Faysal Quraishi Tweeted a prayer for the innocent victims of the violence, “A dua for all people to be able to practice their beliefs and rituals without outside influence and violence. The recent attack on peaceful Palestinians praying at Al Aqsa mosque clearly is in defiance of this basic right of every person. May we see a secure world for all.”

Asim Azhar also expressed his disgust about the act in itself, “I am sickened and disgusted. How can you attack a place of worship and attack defenceless worshipers? And yet the world will stay silent on Israel’s continuous oppression on Palestine” and Farhan Saeed spoke out against the media’s deafening silence, “The world’s deafening silence is criminal! How can the international community sit back and watch this happen? This IS terrorism!”

After several bombs and attacks on innocent civilians, protests for the freedom and peace of Palestinians took place all over the world including Pakistan’s major cities, Karachi, Lahore, and Islamabad. Goodwill Ambassador for peace, Mahira Khan created an Instagram post stating, “If we remain silent, their blood is on our hands too.” Showing their support, several celebrities protested on-ground and used their voices while demanding world leaders to take action. Notable names include Faysal Quraishi, Sheheryar Munawar, Mahira Khan, Ayesha Omar, Anushay Ashraf, Sarwat Gilani, and several others.

In response to the first Al-Aqsa mosque attack, Faysal Quraishi Tweeted a prayer for the innocent victims of the violence, ‘A dua for all people to be able to practice their beliefs and rituals without outside influence and violence’

Finally, through the global uproar about the situation, a ceasefire was declared after 11 days of airstrikes on the blockaded Gaza Strip. In response to this event, Faysal Quraishi stated, “A ceasefire is welcome but a lot more needs to be done. Palestine has been an open-air prison for countless people. Every single day they have been witnessing continuous crimes against humanity with no control over staples like water and electricity. All Palestinians, Muslims, Jews, or Christians need to be freed once and for all! If the world doesn’t take a stand now we will keep on witnessing Kashmir and Gaza’s story repeated for all times to come.”

Since then, despite the declaration of a ceasefire, Al-Aqsa was attacked once again by Israeli police during Friday prayers. The attack wounded several people but the exact number has not been announced as yet. A total of 232 Palestinians including 65 children and 39 women were killed during Israeli attacks on Gaza since May 10. It is evident now that world leaders need to come to a resolution and actively implement the safety of Palestinians and the safety of basic human rights.