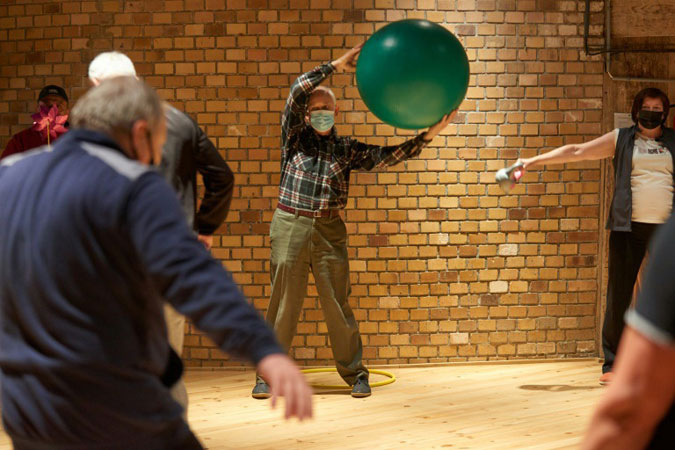 Gyrating with gusto to the sounds of “Girls Just Want To Have Fun”, a group of middle-aged Poles is fighting off lingering Covid symptoms with gym circuits.

But this is no ordinary fitness workout.

It is taking place 130 metres (427 feet) underground in a cavernous space next to a dark green brine lake in a former salt mine in southern Poland that dates back to the 13th century.

“When I came down here, I was enchanted by this place,” particpant Jadwiga Nowak told AFP, as other tracksuit-clad attendees raise fitness balls in the air, ride exercise bikes and jog on the spot.

“I felt this atmosphere, this calm, this silence and this air is totally different from the one on the surface. There is magic here,” said the 60-year-old, who was on a ventilator for 16 days with Covid after being hospitalised in October.

One of the world’s oldest salt mines, Wieliczka is recognised by UNESCO as a World Heritage Site.

Over the centuries, miners turned it into a unique work of art, carving out a maze of tunnels leading to chambers and shrines complete with salt chandeliers.

It is a tourist attraction, but also a health resort that has been offering salt therapy — mostly inhalation but also brine baths — to patients with pulmonary issues for nearly 200 years.

It is now also taking in former Covid patients who have been referred through the public healthcare system for three-week stays, as well as private paying customers.

Visitors go down the former mine shaft in a lift in groups of 10 or 15 and walk along salt-encrusted tunnels, following the tracks once used by mine trains.

Once inside the Wessel Lake Chamber, which is 15 metres high and covered in wooden decking, patients are put through a series of breathing and stretching exercises and monitored by a doctor.

“As a rule, patients who had Covid have far worse symptoms than those with normal asthma. But former Covid sufferers can regain their normal health. On average, there is a 60- to 80-percent improvement in their physical tests” after their Wieliczka stay, said physiotherapist Agata Kita.

Scientists estimate that 10 to 15 percent of former Covid sufferers get long Covid, with symptoms of fatigue, impaired concentration, body pain and breathing problems.

Poland has taken a lead in rehabilitation programmes and research into long Covid, launching its first facility for post-Covid patients in September.

One of the hospitals taking part in the effort is in Glucholazy on the border with the Czech Republic, where patients are also offered mental health care and virtual reality games to test their reaction skills.

Doctors there told AFP during a visit this week that they had found more than 50 distinct lingering physical and psychological symptoms for people who had Covid.

“Apart from the pulmonary symptoms, there are also muscle and joint pains, trouble with balance and coordination, memory and concentration loss and symptoms related to stress and depression,” said Jan Szczegielniak, who works on rehabilitation at Glucholazy.

Among the patients is Piotr Zyjewski, a taekwondo trainer who had to self-isolate at home for 37 days after contracting Covid in October.

“Before, I would start every day with a run of at least 20 kilometres (12 miles) and do taekwondo courses in the evenings. That went on all week, I had a very high endurance level.

“Now it’s difficult for me to accept that I have trouble walking for 20 minutes,” he said.

Back at Wieliczka, the chamber echoes to the sounds of loud breathing exercises.

With its little alcoves carved in the rock, the place has the air of surreal theatre. In one corner, patients can be seen blowing soap bubbles or pinwheels to test their breathing.

There is plenty of joviality and even giggling during one exercise which appeared to be a form of “tag” — but many of the participants were severely ill only recently. Salt therapy, or halotherapy, is popular in Central and Eastern Europe, although the international scientific community is divided over its true benefits and some scientists believe it has only a placebo effect.

But Magdalena Ramatowska, a doctor at Wieliczka, said she has seen beneficial effects. “Above all, the air is pure here. Without any allergens. This environment is excellent for respiratory tracts. “There is high humidity, very little current and a lot of salt air which acts against inflammations and bacteria,” she said.

Lucyna Szulc, who went into hospital in March with Covid and spent 20 days on a ventilator, is also convinced the salt mine is doing her good. “When I came out of hospital, my breathing was very weak,” the 59-year-old said.

“Now, I feel better. I also feel my physical condition is improving. It is easier to exercise faster and keep up with the people who had Covid well before me,” she said.