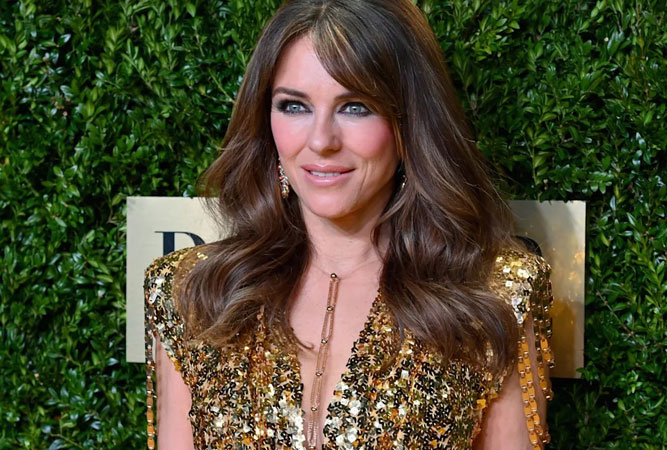 Elizabeth Hurley knows exactly why her bikini photos occasionally grab negative attention: Sexism. On Friday, the actress opened up to Extra during the Breast Cancer Research Foundation’s Virtual Hot Pink Evening, hosted by Hurley, with a special performance by Sir Elton John, one of Hurley’s best friends and godfather to her 19-year-old model son Damian Hurley.

Interviewer Cheslie Kryst asked Hurley about her sexy bikini photo shoots, which are frequently posted to Instagram. “Well the thing is, I have my own swimwear line,” she explained. “I wouldn’t ordinarily be prancing around in quite so much beachwear, so there is a reason behind prancing around in so many swimsuits.” The “Runaways” star launched Elizabeth Hurley Beach in 2005 and models the designs on its website and social media.

Kryst then alluded to a “loud critic” of Hurley’s bikini posts — which is former Good Morning Britain host Piers Morgan. In January, he called Hurley’s photos “creepy” and questioned whether Damien, a sometimes photographer, had shot the images himself (which he does, along with Hurley’s sister).

In response, Hurley posted jaw-dropping photos of herself wearing bikini bottoms and an unbuttoned sweater to reveal nothing underneath. “Far be it for me to suggest the tabloids get their facts muddled, but these pics were in fact taken by my 80 year old mother,” she tweeted. “Not entirely sure if that puts minds at rest or not.”

The British bombshell, who turns 56 on June 10, reflected on the incident telling Extra, “I think people are mean to women and I don’t think it’s how people should be. So I can’t say I am a fan of those sorts of comments, really.”