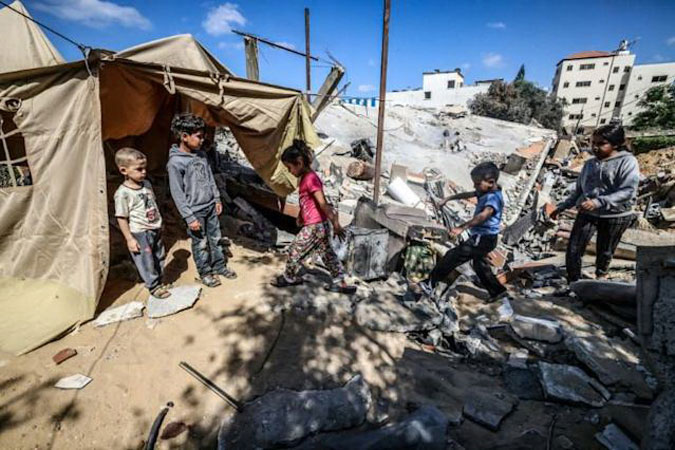 A UN official in war-battered Gaza Sunday called for a “genuine political process” to avert further bloodshed after the military conflict between Israel and Islamist group Hamas that ravaged the Palestinian enclave.

As thousands of Gazans slowly tried to piece back together their lives, top UN staff visited the territory after an Egyptian-brokered ceasefire Friday halted 11 days of mutual bombardment.

On Sunday, in a badly-damaged district of Gaza city, volunteers swept up clouds of dust at the feet of collapsed buildings, while others shovelled debris onto the back of a donkey-drawn cart.

Israeli air strikes on the Gaza Strip since May 10 have killed more than 200 Palestinians, rendered thousands homeless and laid waste to buildings and key infrastructure across the blockaded territory.

It was the latest such bombardment to hit the crowded coastal strip of some two million people, after three previous wars with Israel since 2008.

‘No pause to breathe’

“We need to have a genuine focus on human development,” on proper access to education, jobs and livelihoods, he said.

“But this needs to be accompanied by a genuine political process”.

Speaking earlier to a group of journalists, he said “the layers of hardship in Gaza keep getting thicker”, because the root causes of the conflict have not been addressed.

US Secretary of State Antony Blinken, speaking ahead of an imminent trip to the region, reaffirmed Washington’s support for a two-state solution so Israelis and Palestinians can live “with equal measures of security, of peace and dignity”.

Israeli strikes on Gaza killed 248 Palestinians, including 66 children, and have wounded over 1,900 people, the Gaza health ministry says.

Rockets from Gaza claimed 12 lives in Israel, including one child and an Arab-Israeli teenager, an Israeli soldier, one Indian, and two Thai nationals, medics say. Some 357 people in Israel have been wounded.

There is controversy about how many of those killed in Gaza were combatants, and how many were civilians. Israel’s Prime Minister Benjamin Netanyahu claimed the bombing campaign had killed “more than 200 terrorists” in Gaza.

During the last war in 2014, “we had humanitarian pauses, where people were able to get out,” she said.

“That really speaks to the amount of trauma that was experienced this time, where there was absolutely no pause for people to breathe.

“The comments that I have heard are not ‘I need access to water’ — even though there are 800,000 people who don’t have access to clean water right now — but about the impacts on their lives overall and how they are ever going to recover from this,” she said.

Authorities Saturday started distributing tents and mattresses in the Gaza Strip, as OCHA said at least 6,000 people had been made homeless by the bombardment.

Peace talks have stalled since 2014, including over the status of occupied east Jerusalem and Israeli settlements in the occupied West Bank.

Israeli forces had moved in on Palestinian worshippers at the site, toward the end of the Muslim holy month of Ramadan.

They had also sought to quell protests against the expulsion of Palestinians from their homes in the east Jerusalem neighbourhood of Sheikh Jarrah, to make way for Jewish settlers.

The clashes prompted Hamas to launch rockets from Gaza towards Israel on May 10, and Israel responded with air strikes.

On Sunday, Jewish visitors entered the Al-Aqsa compound for the first time in about three weeks.

“This is the centre of the land of Israel. That’s why we created a Jewish state,” he said, of the establishment of the country in 1948 on land where Palestinians lived.

A Palestinian presidential spokesman warned the Israeli visits could “sabotage” the Gaza ceasefire.