* Oxygen generators to be provided to hospitals in next month
* 29 deaths, 901 new cases of coronavirus reported in Punjab 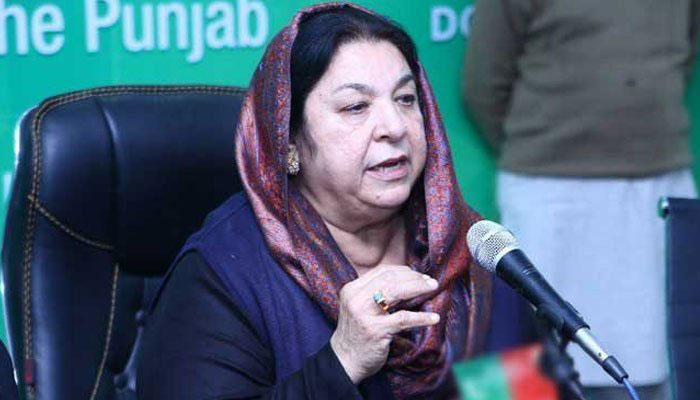 Punjab Minister for Primary and Secondary Health Dr Yasmeen Rashid Sunday said that medical oxygen generators would be provided to all teaching hospitals of the province in the next month in view of the increasing demand for medical oxygen.

Talking to media persons during her visit to the Rawalpindi Institute of Urology (RIU), the Minister said that Oxygen is the most necessary cure to the contagious disease as its shortage has caused a calamity in India.

Dr Yasmeen said that 2818 oxygenated beds were available at the teaching hospitals of the province out of which 1804 are vacant at present while as far as ventilators were concerned 447 are vacant out of the total 790.

The Minister said COVID-19 situation is getting better day by day due to strict adherence to SOPs especially on Eid days, the positivity rate had decreased to 0.5 per cent in Rawalpindi owing to the utmost efforts of the doctors and related staff.

During the last 24 hours, sharing details, Yasmeen said that 28,973 tests have been conducted across the province while only 901 cases were tested positive and 29 lost their battle of life, adding the number of patients who were being discharged was now greater than the number of patients being admitted to hospitals.

So far, a total of more than 2.8 million people have been vaccinated and Punjab was onward to all other provinces in this regard.

Dr Yasmeen said that 128,000 vaccine doses were administered to the people last day and it would be increased to 140,000 per day, the target set by the National Command and Operation Centre (NCOC)for Punjab.

The Minister said that to jab maximum people and achieve the set target of vaccination 6 new vaccinations are being set up in Rawalpindi with already 22 centres in the district.

She informed that the Punjab government has allocated an amount of Rs 1.5 billion from its own budget for the purchase of one million C-vaccines which would be administered to the residents of the province in the next month.

Dr Rashid that the Punjab government had bought 1,000 Actemra injections previously and was buying 1,300 more to distribute free of cost at all treatment centres.

As many as 901 new cases of coronavirus with 29 deaths were reported in Punjab during the last 24 hours.

According to the data shared by the spokesperson of Punjab Primary and Secondary Healthcare Department (P&SHD), the number of coronavirus cases in the province reached 333,958 while death toll 9,768 and recoveries 300,439.

The Punjab health department has so far conducted 4,959,714 tests for COVID-19 in the province.

The Punjab health department has urged the masses to follow SOPs for their protection and cover their faces with masks.

The people should wash their hands with soap several times in a day to protect themselves from COVID-19.

Contact 1033 immediately on symptoms of coronavirus, the health care department urged the citizens.