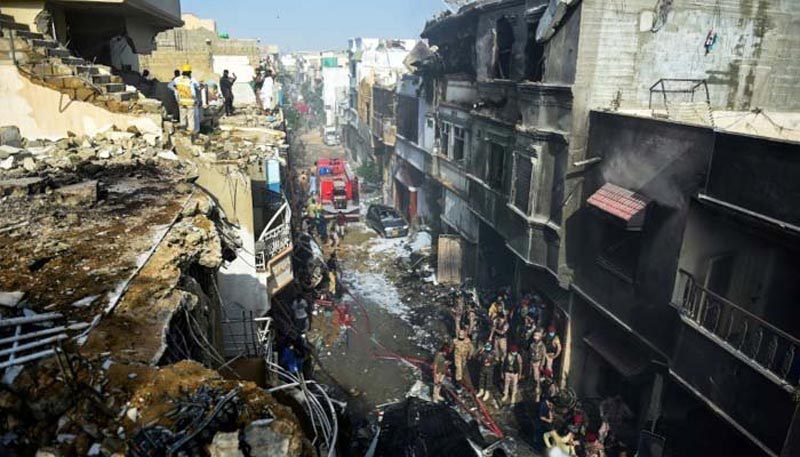 After one year of the crash of PIA Flight PK8303, the heirs of those ill-fated passengers who lost their lives in the crash, have yet to be informed about the investigation, while many of them have not been paid compensation.

The government, however, says that only those families, which did not provide inheritance documents, have yet to get cheques.

That is a huge number!

After every plane crash, there is public demand for stricter aviation safety rules. The same demand occurred when an ATR, an Air Blue Airbus and a Bhoja Airplane of Pakistan International Airlines (PIA) crashed in the airspace of Islamabad. A Russian cargo plane and a charter plane crashed in Karachi. The PIA lost its bird in Multan while the Air Force Fokker fell in Kohat shortly after takeoff.

Every plane crash leaves a trail of casualties.

In the last 10 years, plane tragedies have claimed 502 lives, including five of those killed on the ground.

Of the several plane crashes, the tragedy of PIA Flight PK8303 hit the headlines as two passengers survived the crash.

One is Muhammad Zubair, who tells the media that he with 98 other passengers was in the plane that fell in Model Colony he only remembers “a glimpse of light after regaining consciousness following the crash amid thick smoke, fire and distant noise of people shouting and yelling”.

Another survivor, Zafar Masud, wrote a eulogy for the occasion.

“One year on, the single biggest facet that keeps me traumatized about the crash is the fact that this entire fateful ordeal resulted in the loss of 97 innocent lives. 22nd May 2020 was one of the saddest days in our lives and will remain so forever,” he recalls.

He is grateful to God for being the survivor and managing recovery well, including psychiatric counselling, medical treatment, etc.

He acknowledges the support of the unwavering support of my employer and colleagues, and family and friends.

“I am extremely thankful for the prayers of all known and unknown well-wishers during the past one year.”

The road to recovery was not easy for him.

“However, as I worked towards my recuperation, particularly mental, let me share with you that I discovered other complications of sufferings. I realized that I have been immersed with “survivor’s guilt”. I could not bring myself to meet with the other survivor or the families of victims. I struggled to attend funerals without thinking that the family of the deceased must be wondering why I was given a miracle when their loved ones were not. This is probably the most difficult phase of my life which I am still struggling to get over with a great deal of endeavor.”

The lucky survivor of the crash laments the fact that the situation has not been changed.

“Unfortunately, even after the lapse of 12-months of this crash, which was the 6th Pakistani plane to crash in a decade, nothing soberly changed at the national level to improve passenger safety. I believe that we at least need to bring domestic flight standards on a par with international ones, and enforce standardized procedures to handle crashes and their aftermath. I believe that the entire eco-system needs to be reviewed and revamped to ensure better safety and security standards.”

Mr Masud, a banker by profession, says he will run a not-for-profit organization to work on passenger safety and security. While Mr Masud is going to doing a good job, the PIA management should awake to the situation and ensure safety measures as per international standards. The PIA is currently banned to fly to Europe. That is a shame. The conflict involving pilots and operations and engineering keep on hovering the PIA routes.

The top PIA management should join hands with Mr Masud for passenger safety awareness and also put its own house in order too.