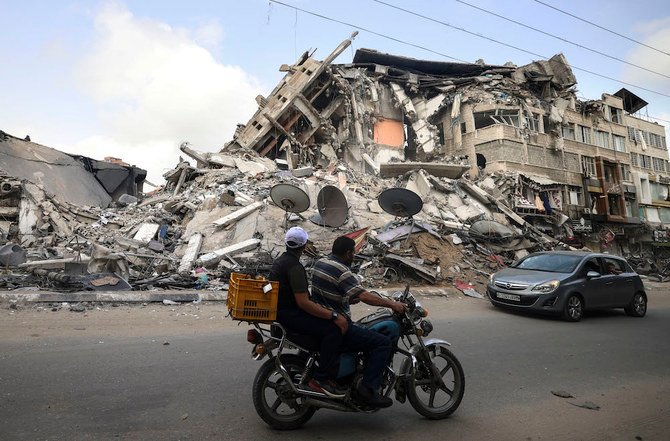 ISLAMABAD: Pakistan would extend all possible support to the reconstruction efforts in Gaza, and cooperate with Palestine, said Hafiz Tahir Mehmood Ashrafi, special representative to the prime minister on Religious Harmony and Middle East.

Talking to foreign media, he said that Prime Minister Imran Khan himself was in constant touch with the latest situation in Palestine. He said that the important government functionaries were also active on the situation of Palestine on the instructions of the prime minister. “We are in touch with governments and embassies of Palestine and Egypt,” he said.

To a question, he said that Minister for Foreign Affairs Shah Mehmood Qureshi has represented not only the Pakistani nation but also the entire Muslim Ummah at the United Nations. The special representative said that all Islamic countries including Pakistan, Egypt, Saudi Arabia, Turkey must unite on Palestine and Kashmir issues.

In Gaza Strip, Palestinians are again left surveying devastation shaped by 11-day of intense air and artillery bombardment by Israeli forces after a ‘ceasefire’ between Israel and Hamas came into effect from Friday morning. In a statement, UN Secretary-General Antonio Guterres said that hostilities had caused serious damage to vital civilian infrastructure in Gaza, which he described as ‘hell on earth’ for children.

Taufiq Rahim, a senior fellow at an American think tank, said that too many Israeli people view ‘calm’ as ‘peace’ while in reality it was simply a state of prolonged injustice for Palestinians. The status of East Jerusalem remains unresolved, he said, adding that Israel’s settlement of the West Bank which it captured along with Gaza Strip in 1967 continues.

Arab Council for Social Sciences former chairman Abdulkhaleq Abdulla said that it was clear that Israeli settlers were behind the most recent outbreak of violence, which started from the Sheikh Jarrah area in East Jerusalem. He said that Israeli administration clearly encouraged violence instead of controlling it.

It is pertinent to mention here that protests and discontent spread to Arab neighborhoods inside Israel. Fighting broke out in Israeli and Arab towns including Jaffa, Ramleh and Lod, in the course of which Palestinian and Hamas flags were raised and some religious and social institutions were also attacked. Those towns along with Haifa, Nazareth and Acre, have sizeable Arab populations, descendants of those who stayed inside ‘Green Line’ when Israel was created in 1948.

These Arab nationals have Israeli citizenship and the right to vote in Israeli elections. “This crisis has brought the conflict back to its roots, which are in the dispossession of the refugees in 1948,” said Nadim Shehadi, an associate fellow at Chatham House. He said that protests on this scale inside Israel have not been seen before, even during the second intifada (uprising).

Riad Kahwaji, a UAE-based defence analyst, said that attacks in Gaza by Hamas have revealed a level of preparation that exceeded expectations in terms of the quantity and quality of missiles, with respect to their range, ability to head deep into Israel territory, and variety of the weapons on hand, such as drones. She said that all of these make the latest round of violence unique.

The hope and the fanfare surrounding the signing of the agreement petered out with the smoke from Gaza, said Dr Albadr Al-Shateri, a former professor of politics at the National Defence College in Abu Dhabi. He said that the conflict, far from re-establishing Israel’s strength, exposed its vulnerabilities. He believes the US, Europe, and the GCC countries can assist in improving Palestinian lives in the occupied territories and within Israel

“More investment to provide jobs, rebuilding the infrastructure, and improvement of the health and educational systems, among other things, will help to create conditions for a negotiated settlement,” he said. Taufiq Rahim said the reality of the situation was that there was a vacuum in new leadership in both Palestine and Israel, with radicals on both sides being the only actors visible on the horizon at present. He said that there needs to be new leaders in both Palestine and Israel who can imagine coexistence.