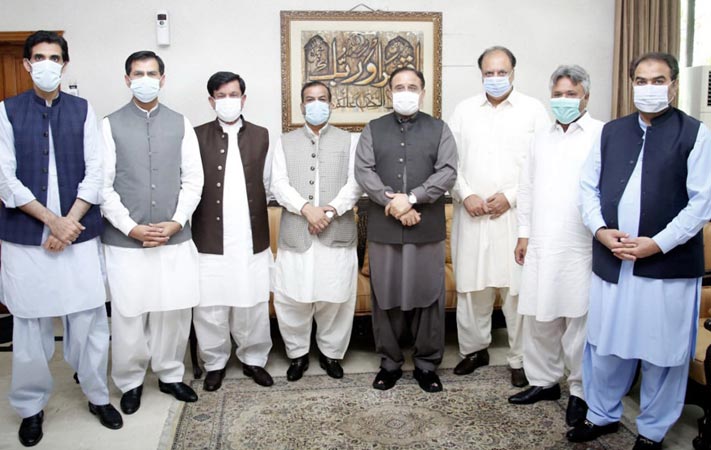 Punjab Chief Minister Usman Buzdar on Friday assured PTI lawmakers who are supporting Jahangir Tareen that their genuine concerns will be addressed.

The chief minister said his doors are open to all and that the party is united under the leadership of Prime Minister Imran Khan. “Injustice will never be done with anybody as the politics of revenge is not a tradition of the current government,” he stressed. “Genuine concerns will be resolved as we believe in the supremacy of justice,” he added.

The visiting lawmakers expressed complete trust in the leadership of Usman Buzdar. “You are our chief minister and we have come to you for the solution of our issues,” they said. “PTI is our party and our unconditional attachment with it will continue,” they added.

Speaking to media after the meeting, Saeed Nawani said the group discussed all issues with the chief minister, including the upcoming budget. “We stand with the government and are satisfied with the meeting,” he added.

Nawani said the group wants an impartial inquiry of cases against Jahangir Traeen and will accept its outcome.

Regarding the meeting with the chief minister, he said that the group has received a very ‘positive response’ from him. He added that CM Buzdar heard their concerns with ‘patience’ and issued instructions to resolve the same. “We had a good discussion in meeting,” said Langrial, adding that he found it necessary to inform that the problems in the PTI have been ‘resolved’. “We hope that the way the chief minister has promised that all the problems of our allies will be resolved, we will wait for their implementation and want to make you believe that we were part of PTI, are in PTI and will remain in PTI,” he added.

He said the chief minister has also reassured them with regards to the matter of the budget and the people of Punjab and that in a few days, a report on different districts would be available. “We will then bring a budget that will benefit the people,” he added.

The group of PTI lawmakers loyal to Tareen emerged in the Punjab and National Assembly after he was booked in different cases and summoned to appear before the banking and sessions courts. The group had recently announced parliamentary leaders in the National and the Punjab assemblies but Tareen had later dispelled reports of a forward bloc being created.