* However, there is little exotic about the four-night cruise, which is restricted to touring Britain's coastline, making a single stop at the island of Portland in southwest England 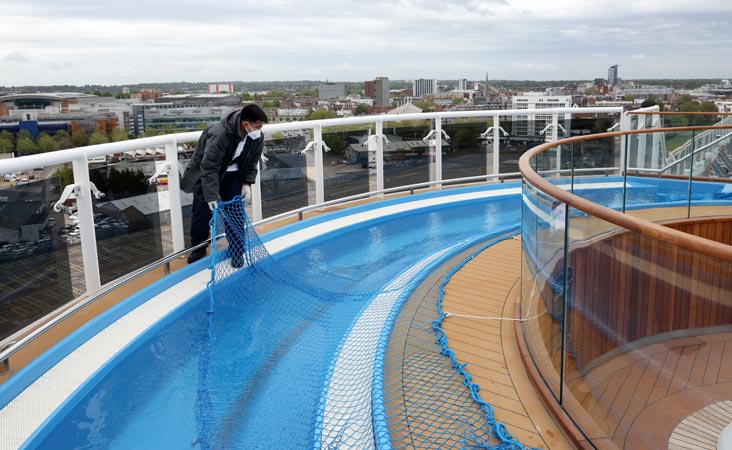 “I have tears in my eyes,” cruising enthusiast Maggie Bill said on Thursday as she boarded the MSC Virtuosa in Southampton for the first cruise sailing from a British port in over a year.

“It’s about the first step, the first stage, out of an awful period of time, really starting to socialise and feel that we belong to the world,” the 66-year-old told AFP, champagne glass in hand.

However, there is little exotic about the four-night cruise, which is restricted to touring Britain’s coastline, making a single stop at the island of Portland in southwest England.

It is the first in a series of so-called staycation sailings planned for this summer, as the coronavirus pandemic continues to keep much of the world beyond British tourists’ reach.

Once aboard the Virtuosa – Europe’s third largest cruise ship, at 331 meters long and 19 decks high – UK residents can still enjoy some of the typical highlights of a holiday at sea like pools, water slides, sports classes, sunbathing decks and bowling.

It is the first in a series of so-called staycation sailings planned for this summer, as the coronavirus pandemic continues to keep much of the world beyond British tourists’ reach

Britain, among the countries worst-hit in Europe by Covid-19, entered the latest phase in its lockdown easing this week, allowing some international travel to restart and cruises to resume within UK waters with up to 1,000 people.

Before the first passengers boarded the Virtuosa, which can hold more than 6,200 people, the crew was busy making final preparations, frantically cleaning tables and decks.

All those coming aboard undergo Covid-19 testing, and are then given a bracelet that serves as a key to their room as well as a tracking system if coronavirus cases are reported on the ship.

Unlike some other operators, MSC Cruises does not require passengers to be vaccinated, but masks, social distancing and regular hand washing are mandatory.

“I wouldn’t let that detract from the experience because we are happy we’re here, we’re celebrating and, yeah, it’s great to have cruising back!” said Lindsay Garvey-Jones, celebrating her 59th birthday on Sunday.

“Food, entertainment, celebration — (it’s) just such a happy vibe and it’s been such a long 14 months.”

Antonio Paradiso, the company’s general manager, argued the pandemic has made cruises, already considered relaxing and quiet, “even more appealing”.

“For people who’ve been stuck at home, doing their own cooking, own dishes, this is wow,” he told AFP.

“Every night you can dress up, looking smart, trying different dishes. I think they will enjoy it even more.”

Britain’s government currently only advises holidaying to a handful of so-called green list countries, where coronavirus is seen as adequately contained.

The list currently includes Portugal but not Britons’ other European tourism favourites like Spain, France and Italy.

Paradiso believes those limits are attracting new customers to the staycation sailings. He estimated that just over half of the passengers on the Virtuosa had never been on a cruise before. “We call them tasters,” he said, predicting many of the first-timers will become “cruise addicts”. New customers could prove a lifeline to a devastated sector that employs 88,000 people in Britain alone.

The industry has generated £10 billion annually in the UK, according to Cruise Lines International Association.

But lost business from lockdowns last year led to a total economic blow of £2.37 billion, it found.

“I get so emotional because the travel industry has been hit really hard,” said Garvey-Jones as she prepared for her four-day jaunt.

“I think this is going to be really good.”