* Persian Nights — Amazing Boutique Hotels & Guesthouses in Iran, published by teNeues, is authored by Thomas Wegmann, who travelled from the top to the toe of the country and left 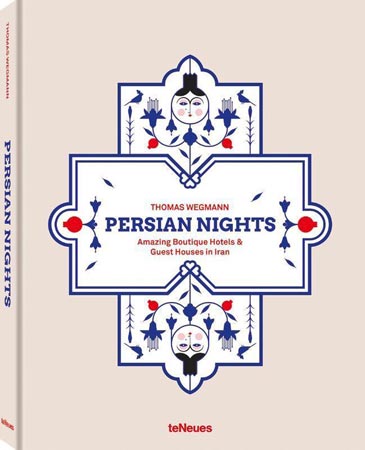 The world’s first guide to hotels in Iran is out next month. And anyone who’s dubious about its contents, that it can’t surely showcase anything enticing, is in for a surprise.

Persian Nights – Amazing Boutique Hotels & Guesthouses in Iran, published by teNeues, is authored by Thomas Wegmann, who travelled from the top to the toe of the country and left it with his preconceptions about the hospitality there shattered.

‘I didn’t think that Iran had so many charming boutique hotels with beautiful rooms, great service and excellent cuisine,’ Wegmann, 46, told MailOnline Travel. ‘And that’s exactly why I wanted to create Persian Nights, the world’s first book about hotels in Iran.’

The book features images and descriptions of 16 boutique hotels and guesthouses in the country – from the capital city Tehran in the north to Qeshm Island, which is located in the Persian Gulf on the southern tip.

According to Wegmann, who’s from Switzerland, one thing unites all the places in the book – hospitality. He said: ‘I was surprised by the warmth and openness that I encountered all over the country as a traveller. During every stage of my journey, I felt immediately welcomed and valued as a conversational partner, without ever feeling pressured in any way.’

The accommodation in the book comes in all shapes and sizes. There are hotels like the Joybar, which was built out of the ruins of a structure from the Qajar Dynasty, which ruled Iran from 1789 to 1925.

There’s an art hotel where guests can peruse an art gallery before heading to bed. Then there are places like the Maymandmoon Ecolodge, which is set inside an ancient cave.

‘I didn’t think that Iran had so many charming boutique hotels with beautiful rooms, great service and excellent cuisine,’ Wegmann, 46, told MailOnline Travel. ‘And that’s exactly why I wanted to create Persian Nights, the world’s first book about hotels in Iran’

Wegmann explained: ‘What’s most striking about many of the hotels introduced in the book is the very meticulous and simultaneously modern management of historical heritage. That’s how hotels such as Manouchehri in Kashan or Joybar in Isfahan, which were built within traditional structures, surprise their visitors with a minimalist interior design.’

In addition to showcasing the hotels of Iran, Persian Nights offers an insight into Iranian culture. The book features pages on the concept stores of Iran, Iranian poetry and the country’s growing fondness for coffee.

‘Alcohol consumption is banned in Iran,’ Wegmann explained. ‘The hotels which I visited abide by this rule. Quite frankly, I wasn’t unhappy about this alcohol-free time and enjoyed the alternatives even more.

‘Iran is known for its incredibly refreshing and delicious lemonades, for example, and in the larger cities, especially, you’ll find more and more espresso bars where the best espresso is made with Italian Marzocco machines.’

During his time in Iran Wegmann also visited some of the country’s World Heritage Sites, like the Historic City of Yazd and the mud buildings of Bam. However, Wegmann told MailOnline Travel that he experienced some of his favourite moments of his travels when he returned from these heritage sites.

‘I experienced some of the most beautiful moments in the evenings upon returning to my accommodation – after having visited the countless Unesco World Heritage Site,’ he said. ‘And just stretching out on one of the traditional daybeds in the charming courtyard, listening to the fountain’s gentle splashing. These were some of the most peaceful and relaxed moments one can imagine.’

According to Wegmann, peaceful evenings were soon followed up with restful nights of sleep during. He said: ‘I felt very protected and secure in all the boutique hotels and guesthouses and let the relaxed atmosphere lull me to sleep.’

Wegmann’s fascination with Iran began as a child, when he learnt about the Persian Empire in his history lessons at school.

In the introduction to the book, he reveals: ‘For years I had harboured a definitive desire to discover this country between the Caspian Sea and the Persian Gulf, between Turkey and Pakistan.

‘This fascination only grew as an adult. He explains: ‘I was enthralled by the boundless hospitality, the deep knowledge, and the strong cultural identity, which I encountered among the Iranians that I met here in Europe.’

Wegmann plans to return to Iran as soon as the travel restrictions are lifted.

‘I’m already looking forward to my next Persian Nights experience once this pandemic subsides,’ he said. ‘When I can return and travel through this fascinating country with its welcoming hosts.’

As to where he’ll stay first, however, he’s undecided.

‘It’s difficult for me to choose a personal favourite,’ he said. ‘Because I already made a selection of hotels that appealed to me. I can say that the Hanna Boutique Hotel in Tehran, housed in a historic building from the 1930s and recently renovated with a modern interior design and its own concept store, is very special.’