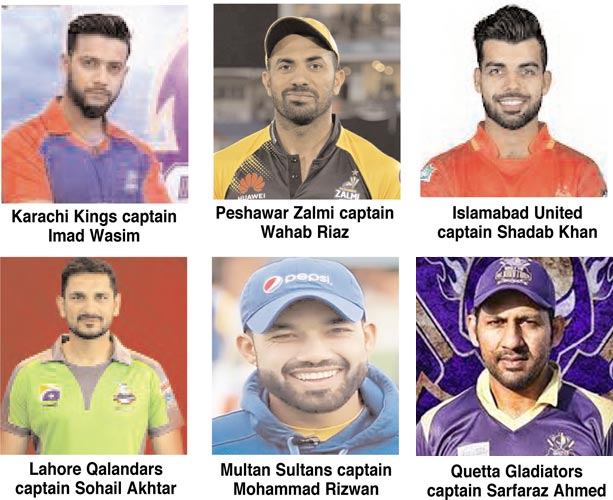 LAHORE: After a COVID-19 enforced break, the Pakistan Super League 6 is all set to resume with the remaining 20 matches of tournament’s sixth edition taking place at the Sheikh Zayed Stadium in Abu Dhabi. The resumption of the PCB’s marquee event has been made possible through the untiring efforts of the PCB with the support of the United Arab Emirates Government, National Emergency Crisis and Disasters Management Authority, Emirates Cricket Board and Abu Dhabi Sports Council. All 24 matches of the 2016 season, 23 matches of the 2017 season, 31 matches of the 2018 season and 26 matches of the 2019 season were played in the UAE. The Sheikh Zayed Stadium staged four matches of the 2019 edition and this will be the first occasion of the stadium hosting a significant number of PSL matches. The entire 2020 season was played in Pakistan, while the 2021 edition was suspended on 4 March a day after the 14th match of the tournament was played at Karachi’s National Stadium.

The six captains are now ready to switch-on and dazzle at the Sheikh Zayed Stadium in search of trophy winning glory. At present, defending champions Karachi Kings top the points table with six points from five matches (three wins, two defeats). Interestingly, all top four sides, Kings, Peshawar Zalmi, Islamabad United and Lahore Qalandars accumulated six points in the Karachi-leg, with Kings taking the top-spot due to their better net run-rate. The 2017 champions Peshawar Zalmi occupy the second-spot with as many points, wins and defeats as the Kings but an inferior net run-rate of 0.273 compared to Kings’ 0.697. Islamabad United, the 2016 and 2018 champions, occupy the third-spot. They recorded three wins in four matches they played in Karachi, their net run-rate is 0.202. Lahore Qalandars, the PSL 2020 finalists, are in the fourth-spot with three wins and a defeat from their four matches with six points and a net run-rate of 0.085. Multan Sultans are languishing in the fifth-spot with two points from five matches (one win, four defeats) and a net run-rate of -0.244 while the 2019 champions Quetta Gladiators are bottom-placed with a win and four defeats in five matches and a net run-rate of -0.936.

Karachi Kings captain Imad Wasim said: “The Pakistan Super League 6 restart is great news for both the players and especially the fans. We were at the top of the points table in Karachi and would like to be able to sustain the run of form in Abu Dhabi too.” Peshawar Zalmi captain Wahab Riaz said: “We are really excited about the resumption of the Pakistan Super League 6. Like the rest of the sides, we also have a rejigged squad in terms of our foreign players.” Islamabad United captain Shadab Khan said: “In the prevailing pandemic challenges, the return of the PSL 6 is a massive boost for all of us. We have great memories of playing in the UAE. The 2017 season proved to be a life changing one for me there, now four years later, I am really looking forward to leading my side in Abu Dhabi.”

Lahore Qalandars captain Sohail Akhtar said: “The Karachi-leg was incredibly competitive and despite our fourth-spot we are joint on points with the three teams ahead of us. This means that we have a real shot at one of the four play-off berths and that is really exciting. This year also provides us the opportunity of changing our poor run in the UAE where we struggled to make an impression in the previous editions, we have some incredible local talent with a potent bowling attack which makes me very confident.” Multan Sultans captain Mohammad Rizwan said: “We had a tough run in Karachi, but we have the depth and pedigree in our squad to turn the tables around when we resume the action in the UAE. We would need to hit the ground running and produce the wins straight away to stay in contention for a play-offs spot and that is a challenge that will motivate both me and my squad.”

Quetta Gladiators captain Sarfaraz Ahmed said: “The Karachi-leg was a challenging one for us as a team but we took a significant step in the last match before the suspension by becoming the first side to successfully defend a target in the Pakistan Super League 6. The last result is a positive that we will carry with us in Abu Dhabi. UAE has been a great venue for us as we have done outstandingly well there in the past.”