* The 29-year-old singer, who performs under the name Manizha, was not expected to win the public vote to pick Russia's song for the contest in the Netherlands 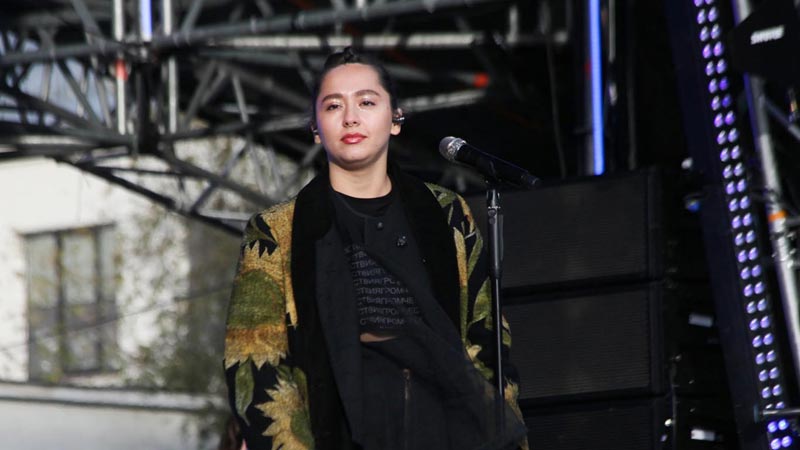 Russia’s unlikely entry to the Eurovision song contest, a Tajik-born refugee and feminist activist, knows she is riling the country’s conservatives.

The 29-year-old singer, who performs under the name Manizha, was not expected to win the public vote to pick Russia’s song for the contest in the Netherlands, due to kick off on May 18.

Donning a brightly coloured and elaborate traditional Russian costume, then shedding it to reveal red overalls, her performance was a far cry from values usually promoted on state channels.

“You’re 30! Hello? Where are your kids? You are cute, overall. But should lose some weight,” went one line from her song.

“Every Russian woman needs to know — you strong enough, you gonna break the wall”.

Donning a brightly coloured and elaborate traditional Russian costume, then shedding it to reveal red overalls, her performance was a far cry from values usually promoted on state channels

A columnist at the opposition-leaning newspaper Novaya Gazeta voiced surprise that the performance was broadcast at all, saying the song “declares war on Russian xenophobia and misogyny”.

The openly feminist tune, which Manizha describes as an anthem “against stereotypes that I had faced”, has since found a huge support base with more than 10 million views on YouTube.

But it also led to an outpouring of scorn from conservative groups, who demanded that Manizha be pulled as Russia’s Eurovision entry.

In an open letter, an association of Orthodox women accused Manizha of “insulting and humiliating Russian women” and inciting “hatred towards men”.

The Investigative Committee, which probes major crimes in Russia, announced that it is following up on a complaint from a veterans’ organisation, which said the text incites “inter-ethnic tension and enmity”.

And Senate speaker Valentina Matvienko slammed the song as “nonsense” and Manizha’s appearance as “surprising”.

Manizha says she became the target of scorn because in Russia it is not customary to “air your dirty laundry”.

“Society is used to keeping silent about its pain and discomfort in the name of traditional values and public opinion,” she told AFP.

Even before her Eurovision selection, Manizha had drawn attention for her views.

After building up a large online presence by posting short music clips on Instagram, Manizha leveraged her popularity as a platform for her activism.

In 2019, she launched a phone app to connect crisis centres with victims of domestic violence — a problem in Russia that activists say the authorities have ignored.

She caused a scandal that same year for taking part in a video defending LGBT rights, a move that she says cost her 10,000 subscribers on Instagram.

Always accompanied by her mother — her “guru” and costume designer — Sangin recalled a difficult youth.

She spent eight days in a coma after her birth in Tajikistan in 1991. Then her home was ravaged by shelling during a civil war that tore the country apart after the fall of the Soviet Union. Manizha and her family fled in 1994 to live the difficult life of refugees in Moscow in the midst of the post-Soviet economic crisis.

The “smell of fear” dominated her childhood as an immigrant in Russia, she told AFP.

But the experience led her last year to become a goodwill ambassador for the UN refugee agency in Russia.

In the role, she launched projects like collecting money to buy school bags for children from refugee families in Moscow.

Manizha says she has an “innate empathy” especially for immigrants who live, according to her, in “legalised slavery” all over the world.

The psychology graduate who dreamt of a musical career since she was a seven-year-old singing along with Celine Dion tunes, now identifies as Russian and treats her host country as her homeland. “I think in Russian. I say I love you in Russian,” she says. “I want to live in Russia and I want the same for my future children.”