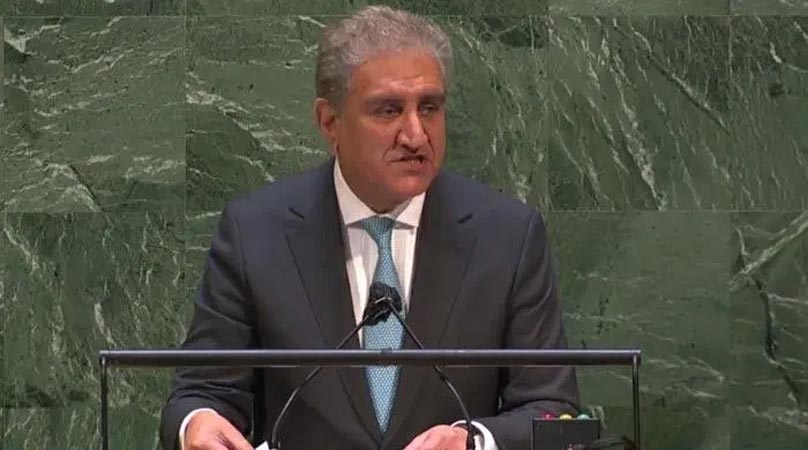 Pakistan on Thursday urged the UN General Assembly to call for a halt to the Israeli aggression in Gaza and demand concrete steps to safeguard the besieged Palestinians, including deployment of an international protection force in the occupied territories.

“We should deploy an international protection force,” Foreign Minister Shah Mahmoud Qureshi told a special session of the 193-member Assembly, pointing out such a force was called for in General Assembly Resolution ES-10/20 and demanded by the Islamic Summit Conference on May 18, 2018. “It is appalling that the (UN) Security Council has been unable to exercise its primary responsibility for the maintenance of international peace and security,” he said, noting that the 15-member body had failed even to demand a cessation of hostilities. “Those preventing the Council from doing so bear a heavy responsibility,” the foreign minister said in an obvious reference to the repeated blocking by the United States of a statement calling for an end to the hostilities on the ground that such a move would interfere with the Biden administration’s attempts to stop the fighting.

“It is appalling that the (UN) Security Council has been unable to exercise its primary responsibility for the maintenance of international peace and security. If the Security Council cannot agree to send the protection force, a ‘coalition of the willing’ can be formed to provide at least civilian observers to monitor a cessation of the hostilities and supervise the provision of humanitarian help to the Palestinians,” Qureshi said. “In these circumstances, the General Assembly must assume its own responsibility. We must not fail the Palestinian people at this critical juncture,” he declared.

Qureshi is on a Palestine Peace Mission on the special instructions of Prime Minister Imran Khan. Speaking from the rostrum of the iconic General Assembly Hall, the foreign minister drew the attention of the high-level delegates to the heart-rending situation in Palestine amid brutal Israeli bombardment. “As we speak, children, women and men in Palestine are being killed with impunity,” he said, pointing out that over 250 Palestinians have been killed and thousands injured – one thirds of whom are women and children. “Death echoes in every home in Gaza,” he said in a passionate speech. “Hundreds of such tragedies are being enacted every hour in Gaza and other parts of the Palestinian territories. So far, over 50,000 Palestinians have fled their homes in Gaza. There is limited access to water, food, hygiene, and health services. Hospitals and access to water and sanitation services depend on electricity. Fuel for the power plants has almost run out,” he further said. “Gaza is plunged in darkness: literally and metaphorically,” he said, pointing out that the only light is that of Israeli explosions.

“This is Palestine, where – in full view of the world – the Israeli air strikes bring down entire buildings to kill and terrorize innocent Palestinians and even silence the media.” “It is time to say ‘Enough’!” he said. “The voice of the Palestinian people cannot and will not be silenced,” he further said. “We, the representatives of the Islamic world, are here to speak with them and for them,” he added.

In his well-reasoned speech, Qureshi said there is no moral or military equivalence between the beleaguered and occupied Palestinian people – who have no army, no navy, no air force – and the Israeli war – machine – one of the most powerful in the world. “This is a war between a military occupier and an occupied people. It is a conflict between illegal occupation and a legitimate struggle for self-determination,” he added.

The foreign minister called for mobilizing all possible humanitarian help for the devastated Palestinian population in Gaza and other parts of the occupied territories. In addition to the UNRWA emergency appeal, he urged the secretary-general to launch a comprehensive humanitarian assistance plan to provide succour and sustenance to the Palestinians. “We need to send medical teams, medicines and other supplies, food and other necessities to Gaza and other parts of the occupied Palestinian territories,” he said, welcoming the access being provided by Egypt to Gaza. “Israel must open all the access points to Gaza to ensure the timely and urgent delivery of international assistance,” he added.

The foreign minister also called on the UN secretary-General and the High Commissioner for Human Rights to offer protection to the Israel’s Arab citizens who are being lynched and murdered by fascist Israeli gangs at the present time. “The General Assembly should condemn: Israel’s forcible and illegal eviction of Palestinians, including in Al-Jarrah district of Jerusalem and continued construction of Jewish settlements; the onslaught against Palestinians worshipers in Haram Al Sharif and Al-Aqsa mosque, the first Qibla of Islam, during the month of Ramadan; and Israel’s brutal and indiscriminate aerial and land bombardment of Gaza,” he said. “Israel’s crimes against humanity should not escape accountability,” he said. “There should be no impunity for violation of international law, including the Fourth Geneva Convention and other human rights Conventions,” he added.

He called for reviving concrete efforts to end Israel’s occupation of the Palestinian territories and to dismantle the illegal settlements and the apartheid-like regime Israel has imposed in the occupied territories. “The General Assembly should secure unconditional implementation of resolution 242 of November 1967 in which the Security Council declared the ‘inadmissibility of the acquisition of territory by war’ and demanded that Israel withdraw its armed forces from territories occupied in the 1967 war. It is, therefore, imperative to initiate bold steps to secure the implementation of the Security Council and General Assembly resolutions calling for the establishment of a viable, independent and contiguous Palestinian State with Al-Quds Al Sharif as its capital. Pakistan endorses President Abbas call for an International Conference to secure a peaceful settlement.”

“The Palestine tragedy is at the heart of the turmoil and conflicts in the Middle East. It is also the principal root cause of the humiliation and anger in the Muslim and Arab world – anger which breeds extremism and often spawns acts of violence,” the foreign minister said. “A just solution for Palestine is imperative for the maintenance of regional and global peace and security,” he said, underscoring that the onus for restoring peace rests on Israel. “It must end its occupation; it must implement the resolutions of the Security Council and the General Assembly.”

“This General Assembly session must send a clear message to the Palestinian people and to Israel,” Qureshi said. “It is only through determined and decisive action that this Assembly can restore the credibility of the United Nations and demonstrate its effective role in preserving world peace and global order based on equity and justice.”