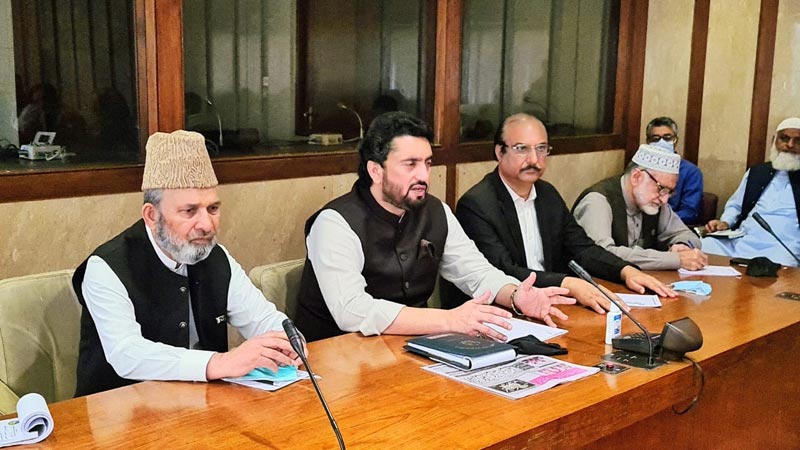 Chairman of the Parliamentary Committee on Kashmir Shehryar Khan Afridi Thursday deplored the arrests of the close family members of prominent APHC leader and Tehreek-e-Hurriyat chief Mohammad Ashraf Khan Sehrai Shaheed by the occupational regime of Jammu and Kashmir and called upon the United Nations Human Rights Council (UNHRC) and rights activists to take note of illegal arrests of close relatives of Ashraf Sehrai.

Shehryar Khan Afridi briefed the APHC leadership on the measures taken by the Kashmir Committee to raise the Kashmir dispute and raise awareness on the issue and said that Pakistan would never deviate from the cause of Kashmir.

Ghulam Mohammad Safi led the prayers for solace of the martyrs and success of Kashmiri freedom struggle.

He lauded the demand made by Chairman of the Parliamentary Committee on Kashmir Shehryar Khan Afridi for demanding an International Medical Corridor on humanitarian basis for the people of Jammu and Kashmir as India had failed to provide medical assistance to the Kashmiri people held under double lockdown.

He said that it is a must that the new generation of freedom lovers must understand the political movement led by Sehrai Shaheed.

He said Islam, freedom and unity of Kashmiris were the principles pursued by Sehrai and he never deviated from the cause of Kashmir.

Syed Yousaf Nasim gave an overview of the services rendered by Khwaja Abdul Gani Lone and highlighted his sacrifices.

He said that Kashmiris were tied in a blood bond with Pakistanis and they could never be separated from each other.

He urged the media to follow the policy of the government of Pakistan on the Kashmir dispute and all actors must pursue the same policy on Kashmir.

Mohammad Hussain Khateeb said that a unified voice needs to be raised by Pakistani political parties over the Kashmir dispute.

Shaikh Abdul Mateen said that Pakistan needs to send a message of hope and solidarity to the people of Jammu and Kashmir.

He urged the youth of Pakistan to get actively engaged on social media platforms and make the world aware on the Indian atrocities against the people of Kashmir.

He also urged Pakistani media to play its due role in the legitimate and just struggle of Kashmir and do not peddle the Indian propaganda on Kashmir.