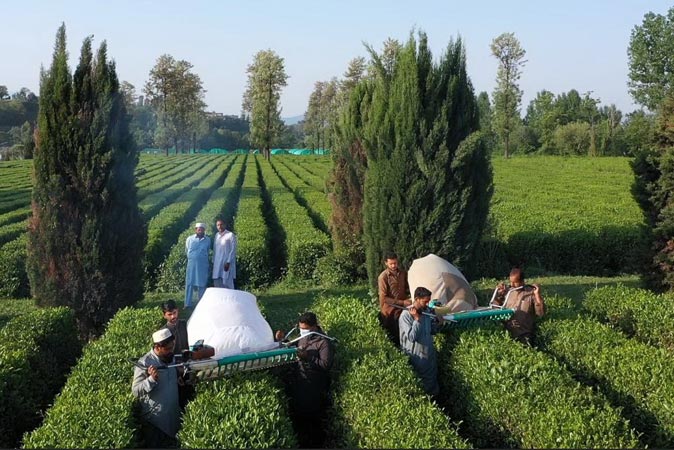 Pakistan to prepare new tea varieties from seeds provided by China, according to a report published by Gwadar Pro.

“Pakistan is one of the three largest importers of tea in the world, from which you can get an idea about our consumption of tea,” said Dr. Abdul Waheed, director of National Tea and High Value Crops Research Institute (NTHRI). As per the statistics from UN-Comtrade, Pakistan’s total tea import in 2020 is USD 589 million, with an increase of 18.8% compared with last year. “To promote our tea industry and save foreign exchange expenses on tea imports, Pakistan needs to get independent in tea production and the tea consumption habits need to change.”

“In Turkey, Malaysia, Indonesia, China, Vietnam and many other countries, people mostly use tea produced in their own country regardless of its quality and flavor, whereas we have stuck ourselves to the Kenya tea. If we get some other tea, we will not like it.”

Abdul said. Kenya black tea accounts for approximately 60% of the Pakistani tea market. “We spend too much foreign exchange each year on tea import. If we spend even 1 to 2 percent on buying land and cultivating tea, increasing the domestic tea production will not be hard.” Ihsan ul Haq, scientific assistant of NTHRI suggested.

“Chinese team conducted their survey in the areas of Manshera, Uggi, Balakot and Swat, they selected few thousand acres that were perfect for growing tea.” “Although we have experimented, tested, and adopted the raw material in Pakistan, there is still a need to bring in good foreign tea varieties. However, no country in the world wants to lose its market, so whenever we have tried to cooperate with any tea-producing country in this field, they refuse to do so. China was the only country who shared the seed of tea with us.”

Abdul said, noting that tea varieties Chui, Rupi, Kewin, Ung Shung in Pakistan are all Chinese varieties. “I have seen these varieties growing in China and they have performed as well in Pakistan.” “We are further investigating it and conducting tests to find out the variety which is good in production, which can be cultivated in the hilly cold regions, in the semi-hot regions or subtropical regions,” Abdul added that NTHRI is now able to prepare around 12 new varieties of tea. “We are exporting our green tea to Japan in the last 4 years. Our tea is just like their tea, it is even better in quality. It is very famous and liked by them a lot. Based on this, we are now working on the new project of tea and we wish to get success.”