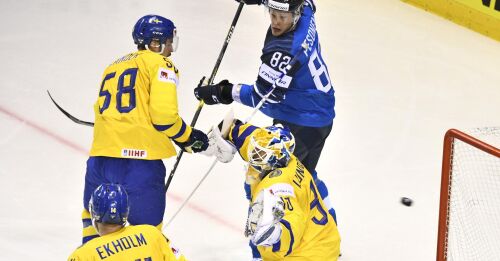 Latvia: Months of political drama reminiscent of the ice arena diplomacy of the Cold War era have led up to this year’s ice hockey world championship starting in Latvia this week.

The contest was supposed to be co-hosted by Latvia and Belarus until mass protests and deadly repression swept the latter after an election on August 9, 2020.

A group of athletes fiercely opposed to President Alexander Lukashenko, who has ruled Belarus since 1994, campaigned for the championship to be taken away from the country.

They were soon joined by Latvia, which on August 17 said it no longer wanted Belarus to co-host, breaking with decades of collaboration between the two neighbours.

“Our main agenda is to do everything, if the situation in Belarus does not change, to move the championship elsewhere,” Foreign Minister Edgars Rinkevics said at the time.

Eventually, and after key sponsors withdrew their support, the IIHF on January 18 said it was stripping Belarus of its role.

Ice rinks were an arena for superpower rivalry during the Cold War, most famously between the US and Soviet teams.

The more recent diplomatic showdown struck particularly close to home for Lukashenko — a keen ice hockey player who has promoted the sport and already hosted the world championships in 2014.

In an interview with a Russian journalist, Lukashenko called the decision a “disgrace” and said there was “zero reason” not to allow Belarus to co-host the tournament.

But he also sought to play down the snub, saying that “it’ll pass” and that he was “not particularly worked up about it.”

Opposition leader Svetlana Tikhanovskaya, who ran against Lukashenko in the 2020 election and has accused him of rigging that vote, called the IIHF decision a “victory.”

“Lukashenko has not succeeded in pretending that everything is under control,” she wrote on her Telegram channel.

Belarus has seen unprecedented mass protests against Lukashenko since the presidential election, and there are currently estimated to be more than 300 political prisoners in the country.

The government has also retaliated against the IIHF decision by banning imports from sponsors who pushed for the sanction, including the carmaker Skoda and the cosmetics brand Nivea.

She told AFP the decision showed the sporting community would no longer “take part in (Lukashenko’s) political theatre.”

“The decision shows that Belarusians are not alone, that people listened to us and shared in our common grief,” she said.

She said she hoped other sporting organisations would follow suit, pointing to the European Cycling Union, holding the European Track Championships in Belarus next month.

Herasimenia, who lives in self-imposed exile in Lithuania, is now wanted in Belarus for allegedly “harming national security”.

When the IIHF announced its decision, the head of the Belarusian ice hockey federation, Dmitry Baskov, branded as “traitors” the Belarusian athletes who had campaigned for it.

“We regret that the IIHR and major international brands have become victims of political games around Belarus,” he said.

According to pro-opposition organisations, Baskov himself was directly implicated in the brutal crackdown against the protests.

They have accused Baskov of taking part in the fatal beating of a protester, Roman Bondarenko. These claims led Latvia in November to bar the official from entering the country.

Despite all the drama, the Belarusian team will still be taking part in the contest, and Latvian officials have been keen to move on, focusing on logistics and whether or not fans will be allowed to attend the games.

“We are rooting for hockey fans. We still hope they can come to the games; we’ll be ready until the last minute to open arena doors for them,” said Edgars Buncis, head of the organising committee.