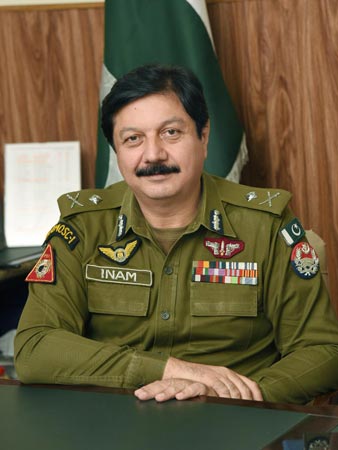 Inspector General of Police (IGP) Punjab , Inam Ghani on Wednesday said that Punjab Police is performing its duties as a front line worker for the protection of lives and property of the people during the Corona epidemic and noted that several officers of the police force while performing their duties have been martyred by the Corona epidemic.

The police chief said that the process of corona vaccination should be completed in all the districts of the province as soon as possible so that the police force could perform its duties of service and protection of the people while remaining safe from this contagious epidemic.

He issued these instructions to the officers during a meeting held at the Central Police Office.

During the meeting, DIG Welfare Agha Muhammad Yousuf informed IG Punjab that corona vaccine is being administered to officers over 40 years of age in all districts of the province with the help of government and so far 14679 officers and personnel between 50 and 60 years of age have been vaccinated against corona While 6954 officers and personnel between the ages of 40 and 50 have been vaccinated against corona virus.

He highlighted that a total of 21633 officers and personnel above the age of 40 years have been vaccinated against corona while the vaccination of the remaining staff is going on uninterruptedly and in all the districts besides the district police Punjab Constabulary, Investigation Punjab, Special Officers and personnel in other field formations including Branch, CTD, Traffic, SPU, PHP are also being vaccinated against corona.

The IG Punjab directed that all officers should ensure implementation of SOPs during duty and face masks should be considered an integral part of the uniform, and hand sanitization should be ensured at any cost.

He noted that the health and life of all the officers and personnel and their families is of utmost importance to the police department as only by staying healthy c we can better fulfill our responsibility of serving and protecting the people.