Israel-Palestine conflict must be resolved as per relevant UN Resolutions: Gillani 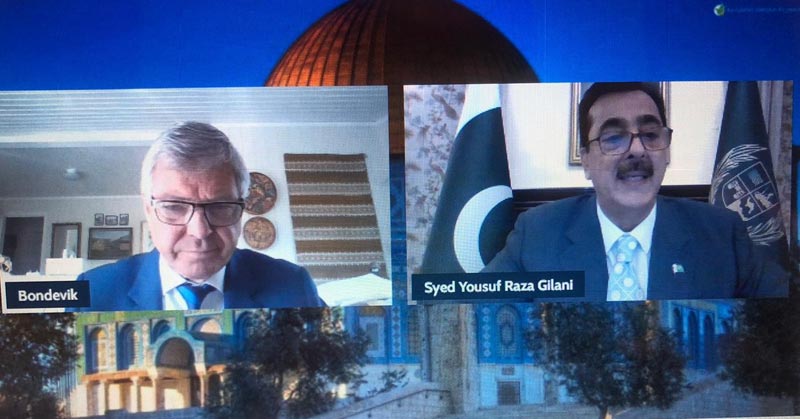 For lasting peace in the region, Yousaf Raza Gillani Wednesday underscored the need for a two-state solution to the Israel-Palestine conflict as per the relevant United Nations Resolutions, with pre-1967 borders, and Al-Quds Al-Sharif as the Capital of a viable and independent Palestinian State.

Not only is Israeli barbarism against innocent worshipers reprehensible, but such acts have no place and are not allowed in any religion, said Yousaf Raza Gillani while commenting at a webinar hosted by “Foundation Dialogue for peace” at Oslo, Norway, titled: Israel-Palestine conflict; Dialogue Not Violence”.

President, Foundation Dialogue for Peace, former Prime Minister of Norway, Ambassadors of Israel and Palestine to Norway, General Secretary of the Muslim World League were the other prominent amongst the participants.

Yousaf Raza said the Palestinian issue is a long-standing and unresolved issue in the middle East. Decade-old tension between Israel and Palestine has resulted in heavy calamities and human losses.

Hundreds of innocent Palestinians have been martyred, including women and children, and scores injured in the recent escalation between Israel and Palestine. This decade-old bloodshed, caused by Israeli occupation forces must end immediately, he stressed.

He said, ignoring legitimate Palestinian demands, unenforceable UN Security Council resolutions, and backtracking on past promises and commitments have flared up the tension and caused outrage in the Muslim world, especially in the Palestinian people.

Recent tension, if not resolved, will push the region towards a major war.

The current situation is leading us to a war that will have devastating consequences for the whole world particularly for Israel, Palestine, and the Middle East, he warned.

He underscores that the regional power should learn from the Kashmir issue where India is pursuing a policy of violence and barbarism.

The people of Kashmir have been facing lockdown for decades but, India despite its inhumane policies, failed to suppress the voice of the Kashmiri people. “Conflicts are not resolved through wars but dialogue. Israel’s illegal occupation and settlement is against international law and must end now”, he underlined He cautioned that the continuous oppression of Palestinian people by Israeli-occupation forces and fear of losing the state will lead Palestinians towards militancy.

Over the past several months, many Middle Eastern countries have normalized relations with Israel in a hope that they will convince Israel to abide by the relevant Security Council Resolutions and end its illegal settlements on the occupied land. The latest conflict will undermine this peace process, he observed.

In his concluding remarks, Gillani urged the international community to fulfill its responsibility by bringing both sides to the negotiating table to prevent further escalation.

He said that conflict cannot be resolved through war, violence, and bloodshed, but the way of peaceful and meaningful dialogue will lead the region towards peace.

Bold, serious steps and political will of Israeli leadership are needed to reduce violence and promote peace, he further added.