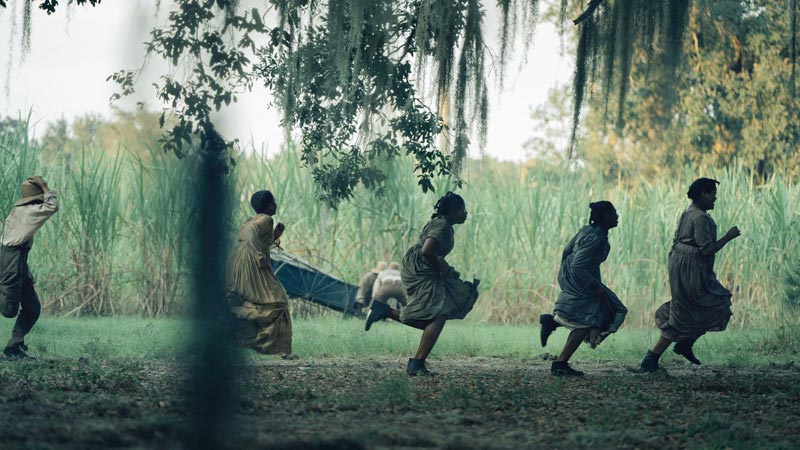 The visible and the invisible, realism and fantasy, meet in this beautiful and searing series from director Barry Jenkins. The real underground railroad, the historical 19th-Century network of people and safe houses that helped slaves escape, becomes a literal, physical trainline carrying people to safety in Colson Whitehead’s novel, on which the show is based. Jenkins teases out and emphasises both the book’s harsh physical realism and its inventions, shaping them in his distinct style. As in his Oscar-winning Moonlight and If Beale Street Could Talk, every image is gracefully composed, shimmering with imagination and compassion. The main character, Cora, makes several stops on the railroad’s route as she runs from enslavement on a Georgia plantation, pursued obsessively by a slavecatcher named Ridgeway. As she does, a flow of poetic images – a tree blazes with fire or stands stark and bare in the landscape – live alongside occasional depictions of slaves whipped and tortured.

In the first episode, that unflinching depiction of plantation life might bring to mind Steve McQueen’s 12 Years a Slave, but McQueen and Jenkins are very different artists. Here Jenkins establishes Cora’s world before moving in a more fantastical direction. At the start, Cora, played with great assurance by the South African actress Thuso Mbedu, is surrounded by brutality but accepts her fate. Throughout the series, the scenes of slaves whipped, hanged and burned are all the more effective for being used so judiciously.

Eventually Cora flees the plantation with her friend Caesar. He is one of many characters displaying the range of attitudes among the enslaved, saying, “I won’t be bred like cattle”. Ridgeway is determined to find Cora because he has failed to capture her mother, who disappeared from the plantation when Cora was a girl, an abandonment that left her so haunted and angry she dreams of slashing her mother’s throat with a knife.

Reading about a literal underground railroad is one thing, but seeing it on screen takes the metaphor one step closer to reality. Jenkins finds a balance by making the railroad physically believable yet at times fantastical. One of the stations is no more than a dark tunnel and a handcar. But in a dream, Cora enters a large, gleaming station brimming with people, where uniformed staff wait behind a ticket counter. 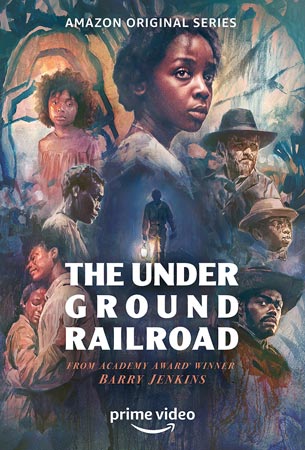 Her first stop off the railroad is a bright, urbane town in South Carolina, where a group of white people educate and sponsor the futures of black people. Cora wears a tailored yellow dress and hat, takes lessons in a classroom and waltzes with Caesar under glowing lanterns at a dance in the town square. But she also works in a museum that stages scenes of slave life. On display behind glass, she performs the role she recently lived, picking cotton. The town, with its intentionally anachronistic skyscrapers, may seem to point to a better future, but that beneficent world is not what it appears.

Every one of Cora’s steps toward freedom leads to a cruel reversal and Mbedu fiercely reveals her increasing determination to keep moving toward the future. Jenkins’s imagery reflects both the world around Cora and her state of mind, as she travels through a scorched landscape in Tennessee on to a lush green farm in Indiana. Like the landscape, the fantastical elements reflect her hopes and fears. She tumbles down a hole, floating like Alice in Wonderland, only to arrive in a dank, dirt-floored tunnel. Among the more effective poetic touches, Jenkins frequently shows characters standing still before the camera, looking at us. Many are dead but they are not translucent ghostly images. They are physical presences, alive with significance, even if they are no longer living in Cora’s world.

With Ridgeway endlessly in pursuit, Cora is captured and escapes more than once. But Jenkins occasionally breaks the typical, plot-driven miniseries form. Most episodes here are an hour long, but one flashback instalment to Ridgeway as a young man is only 40 minutes, and reveals the cruelty that was always in him. Edgerton makes Ridgeway complex and vicious, never sympathetic but always more than a clichéd villain. He is not a slaveowner but shares and spouts their certainty about the white man’s superiority, an idea he chillingly calls “the American imperative”. The show’s most enigmatic and unsettling figure is Ridgeway’s sidekick Homer, a small black boy dressed like an adult in a suit and a bowler hat. The child is devoted to Ridgeway, who is not technically his owner but whose ideas have ensnared the boy’s mind.

The series is expansive enough to include the intricate antebellum culture that Whitehead’s novel depicts. Some white characters recite the Bible, using religion to justify slavery. In one sequence Cora arrives at a farm in a community of free black people, where they disagree about how much to engage with the white townsmen. Nothing is simplified.

Jenkins directed all 10 episodes and wrote or co-wrote several. He brought along two essential collaborators, the cinematographer James Laxton and composer Nicholas Britell, both of whom worked on Moonlight and Beale Street. Laxton’s photography ranges from sparkling sunlight to the yellow-tinged interior of an attic crawlspace where Cora hides. He is too attached to backlight shining through doorways, but the beauty of his images doesn’t mitigate the horror of the story. Britell’s elegant score is entirely fresh, at times symphonic or sparely elegiac, but always emotionally moving. The soundscape includes a howling noise, as if a bad wind were blowing into Cora’s life.

Jenkins has said, in a statement included in the press notes, that as a child the words underground railroad evoked images for him of “black folks building and working and thriving on vessels of their own creation far beneath the ground.” That is one of the many reasons he was the ideal person to adapt a novel built on the power of metaphor and imagination. Slavery is often called “America’s original sin”, its legacy of injustice and racial division lingering to this day, an idea this series eloquently conveys. As one character says, “We cannot escape slavery. Its scars will never fade.”