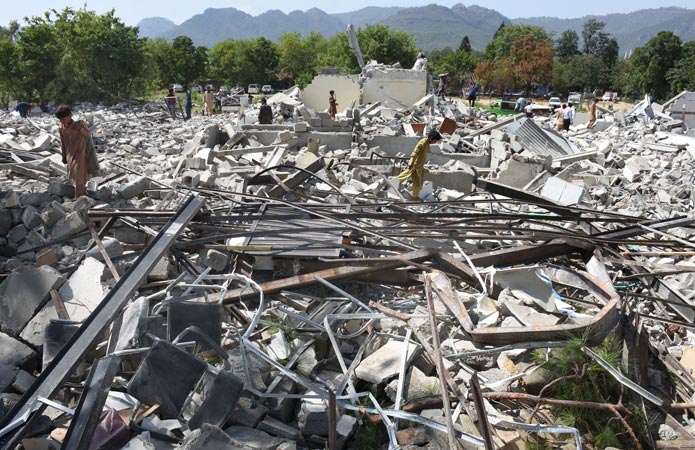 The Capital Development Authority (CDA) on Sunday demolished chambers of lawyers as per the judgement of Islamabad High Court, which were illegally erected on a football ground in F-8 as the deadline for voluntarily clearing the chambers had expired on May 2.

The authorities bull-dozed nearly 50 chambers, while around 300 lawyers voluntarily surrendered their chambers and collected their valuables. Some lawyers even sold out the structures at throwaway prices, but many still failed didn’t vacate their chambers.

Following the March 2 apex order, the Islamabad Bar Association had filed a review petition and the lawyers assumed that the CDA would delay its anti-encroachment drive till the adjudication of the review petition. But, since the court had not issued any restraining order, the CDA launched an operation and demolished 50 out of the over 500 chambers illegally constructed on the football ground.

The review petition challenged the Supreme Court’s orders, arguing that it contained errors floating on the surface of the record which went unnoticed like the Aug 24, 2007, order by a larger bench of the Supreme Court in which the shifting of the district court Islamabad premises from F-8 to G-10 was stayed.

The review petition pleaded that the Aug 24 order categorically establishes that the federal government and the authorities concerned had not only given a clear undertaking that the existing chambers and the bar room would not be dislodged unless facilities to the bar were provided simultaneously with the shifting of the district courts.

The smooth transition in view of the commitment made before the highest judicial forum was binding on all courts and authorities, the review petition noted, adding that against this background, IHC should not have passed its order on Feb 16.