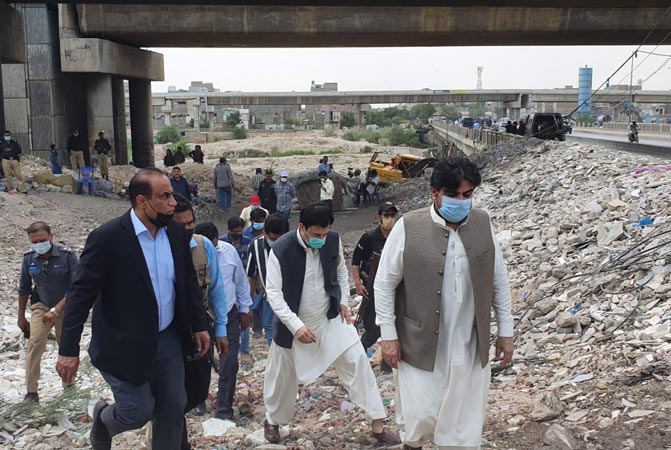 Syed Nasir Hussain Shah said that a successful operation, water supply in the district South, especially in Lyari and adjoining localities will improve by 20 to 25 per cent.

The minister said this while inspecting the site after completion of major action by anti-theft cell Karachi Water and Sewerage Board against reported water theft in Golimar area.

Local Government Secretary Syed Najam Shah and others also accompanied the minister on the occasion.

Nasir said that water was being reportedly stolen in technical and scientific ways under the Lyari river bridge. Alleged illegal connections have been made in the water board lines going deep down. Similar kinds of water theft have been identified in other areas of the city and action will also be taken there soon .

He said that the water board teams were facing resistance from the water mafia. Sindh Chief Minister Syed Murad Ali Shah has asked Sindh Police Chief and Rangers to give full support to Water Board teams.

The provincial minister for local bodies added that the Sindh chief minister had also approved the setting up of an anti-water theft police station in the city. He said that

Grand operation has been launched in the city and orders have been issued to take action against water thieves on a daily basis,’ the minister said.

Earlier, the anti-water theft cell of KW&SB led by in-charge Rashid Siddiqui carried out a major action in Lyari river in Golimar area this morning. Police, Rangers and Sindh Police SSU took part in the operation. The water mafia was stealing millions of gallons of water meant for Lyari and adjoining areas and selling it to industries through illegal connections in the water board main lines.

The Anti-Water Theft Cell has successfully completed the operation against the accused involved and seized motors, pipes and other equipment used in theft.