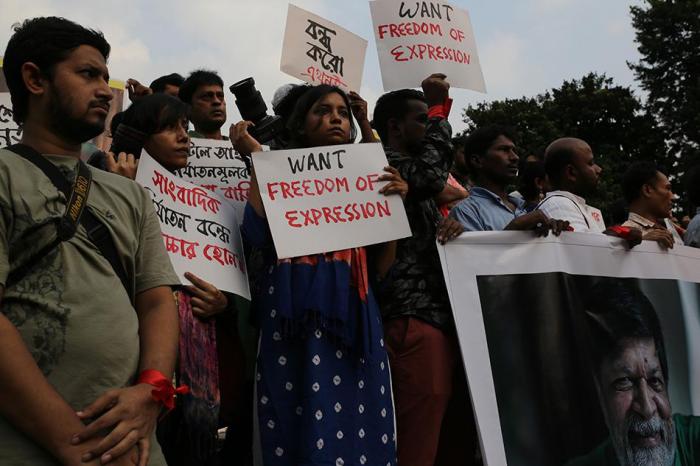 Dhaka: The arrest of a top Bangladesh reporter, who wrote scathing stories on the country’s response to the coronavirus pandemic, sparked protests by hundreds of reporters on Tuesday.

Rozina Islam, an investigative journalist for Prothom Alo newspaper, was detained late Monday under the Official Secrets Act, police said.
She appeared in court on Tuesday charged with stealing health ministry documents under the same act. A new hearing was set for Thursday.
Rights groups say a crackdown on the media has grown during the coronavirus crisis. Hundreds of journalists went to the Dhaka police station, where police took the 42-year-old reporter on Monday.

Some tried to block entrances to the building, and the protests continued on Tuesday.

Before her formal detention, Islam spent five hours at the health ministry accused her of stealing documents, according to a ministry complaint seen by AFP.

Leaders of journalist unions and advocacy groups who spoke at the protests said Islam had been arrested because of her reports on the government’s response to the pandemic.
Her stories included how urgent medical equipment has been left at Dhaka airport for months, bribes being offered to recruit doctors and alleged graft procurement at the health ministry.

“Her reports have clearly exposed the weaknesses of the ministry to safeguard the health rights of the people during the coronavirus pandemic,” the Law and Mediation Centre group said.
It demanded Islam’s immediate release.

Bangladesh has reported just over 12,000 coronavirus deaths and nearly 800,000 infections, but experts say this grossly under reports the true toll.

Activists also say the pandemic has worsened freedom of the press in Bangladesh, with the government increasingly using a draconian digital security law to stifle criticism.
According to Rezaur Rahman Lenin, a UN rights consultant, at least 85 journalists have been charged under the 2018 law during the pandemic.

Saad Hammadi, South Asia expert for Amnesty International, said Islam’s arrest “is an attack on journalistic freedom. “The authorities must drop the cases against the journalist and release her immediately in the interest of the state’s international commitment to protecting the right to freedom of expression,” he said.