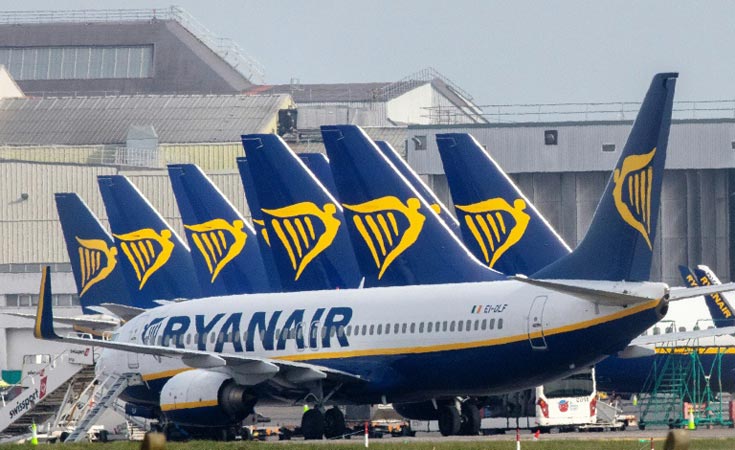 Ryanair posted Monday an annual net loss of 1.0 billion euros as the coronavirus pandemic grounded the global aviation sector but the Irish no-frills airlines said a recovery has already begun.

Ryanair described the year as “the most challenging” in its 35-year history.

The earnings for 12 months to the end of March compared with profit after tax totalling 649 million euros in 2019-2020, the European heavyweight said in a statement.

But with the UK — the company’s key market — partially lifting international air travel on Monday, Ryanair chief executive Michael O’Leary told the BBC that the company was “very optimistic for the next couple of months”. This after the carrier’s passenger traffic dived 81 percent to 27.5 million in its last financial year.

O’Leary warned that fares would climb in 2022 as capacity remains capped by restrictions. “There’s no doubt in my mind that prices will rise, particularly during the peaks of the… (national) holiday weekends, the school holiday travel period, but that won’t affect bookings for summer 2021,” he told the BBC.

The Dublin-based carrier said it expects to benefit from a strong rebound of pent up travel demand through the second half of 2021, hoping to return to pre-Covid growth in a year’s time.

Ryanair said it was encouraged by the production of multiple Covid-19 vaccines, adding that it hopes their rollouts “will facilitate the resumption of intra-Europe air travel and tourism this summer”. It noted that “if, as is presently predicted, most European populations are vaccinated by September” the sector can look forward to a strong recovery in air travel, jobs and tourism from the end of 2021.

“The recent strong increases in weekly bookings since early April suggests that this recovery has already begun,” Ryanair said. It expects traffic for its current year to be towards the lower end of a previously-forecast 80 million-120 million passenger range.

Stripping out fluctuations to oil and foreign exchange prices, Ryanair’s annual net loss came in at 815 million euros. Annual revenue slumped 81 percent to 1.64 billion euros. “As we look beyond the Covid-19 crisis, and the successful completion of vaccination roll outs, the Ryanair Group expects to have a much improved cost base and a very strong balance sheet,” the airline said.

“Portugal this morning. We’re very hopeful that Italy and Greece will be added to that green list before the end of May, and Spain will come shortly thereafter.” The UK has placed 12 countries on its travel green list, including Australia, Israel, New Zealand and Iceland.