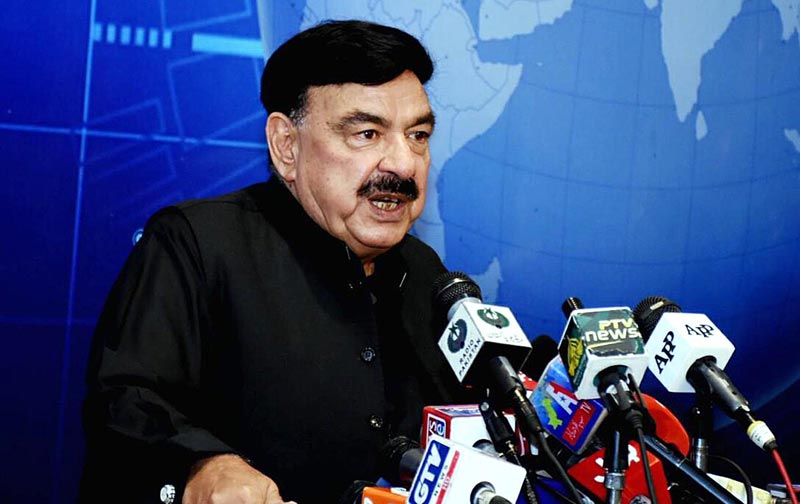 Minister for Interior Sheikh Rashid on Monday said the name of Pakistan Muslim League-Nawaz (PML-N) President Shehbaz Sharif has been placed on the exit control list (ECL) after the approval of the federal cabinet.

A sub-committee of the federal cabinet had recommended to place Shehbaz’s name on the ECL last week following request of the National Accountability Bureau (NAB), the minister told a press conference. He said Shehbaz Sharif cannot travel abroad after his name being placed on the ECL as he is facing multiple corruption references filed by the NAB. As the United Kingdom (UK) has imposed a travel ban on Pakistan, Shehbaz was supposed to fly via Qatar for London, he said. “Five people from Sharif family are on the run after the Hudaibiya Paper Mills case. If Shehbaz leaves now, he will never return just like his brother,” the minister observed.

The minister said all the co-accused in NAB reference have already been placed on the ECL, adding that if Shehbaz wants he can file a review petition within 15 days. He said the trial of Shehbaz Sharif is in progress and his exit from Pakistan will delay proceedings of the trial. The case against Shehbaz Sharif involves a colossal sum of over Rs7 billion, therefore like his brother Nawaz Sharif, if he absconds, his extradition from the UK will not be possible, he added.

The PML-N president, he said, had breached his undertaking as a guarantor in the past to the Lahore High Court that he would bring his brother back to the country. He said no data is available with the ministry from which it could be assessed that Shehbaz Sharif requires medical treatment which is not available in the country. He said opposition can do no harm to Imran Khan as he is focused on his mission to bring country out of crisis.

To a query, Sh Rashid said the entire Islamic world is mourning over the situation in Gaza, adding that a resolution would be tabled in the National Assembly to discuss the prevailing tense situation in Palestine. He praised the role of China for convening United Nations Security Council meeting over the Israel-Palestine conflict.

The civil and military leadership are on the same page and playing due role for country’s progress and prosperity, he said in response to another question.

Meanwhile, Minister for Information and Broadcasting Chaudhry Fawad Hussain Monday said the name of Pakistan Muslim League-Nawaz (PML-N) leader Shehbaz Sharif has been placed on the exit control list (ECL) after federal cabinet’s approval and completion of all legal formalities. “All record in this regard has been updated,” the minister said on his Twitter handle.

In another tweet, the minister said the Pakistan Tehreek-e-Insaf (PTI) government never did politics on coronavirus, but the PML-N leadership followed the footsteps of its ‘neighbouring friends’ and violated the Covid-19 standard operating procedures (SOPs), which must be condemned. Fawad said Allah Almighty has protected the nation from the severity of the virus to a great extent because of timely and effective safety measures taken by the government. The minister warned such anti-social tactics may not help PML-N revive their politics.

Meanwhile, the federal government on Monday challenged in the Supreme Court the Lahore High Court’s (LHC) judgment allowing Pakistan Muslim League-Nawaz (PML-N) President and Leader of Opposition in the National Assembly Shehbaz Sharif to travel abroad. The petition filed by secretary interior, through Advocate-on-Record Ch Akhtar Ali, prayed that the leave to appeal might be granted against the impugned order dated May 07 passed by the single member bench of the LHC.

The petition stated that how the honorable judge of the LHC could allow the opposition to travel abroad without issuing notices to relevant departments, requesting the apex court to suspend the May 7 verdict, and allow the government to file an appeal against it.