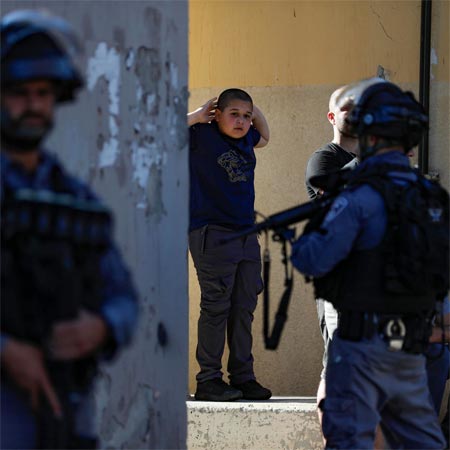 Arab-Israeli supermarket cashier Israa Jarbou has missed a week of work for fear of getting attacked by Jews on the bus out of Jaffa, a mixed Arab-Jewish quarter of Tel Aviv.

“They’ll see I’m religious,” said the 27-year-old, who wears the Muslim hijab head covering. “There is no security.”

Living nearby, Jewish seminary student David Shvets, 24, voiced similar fears, saying local Arabs had pelted him with stones and that a nearby synagogue was torched.

“We now go in a large group with a police escort to get home at night … in the heart of the state of Israel!” he said incredulously, describing the situation as a “jungle”.

Hostility has gripped usually quiet mixed communities of Israeli Jews and Arabs since the start of a full-blown military escalation a week ago pitting Israel’s army against the Islamist group Hamas in the Gaza Strip.

The most intense fighting since 2014 was sparked by unrest in Jerusalem, where Israeli riot police stormed the Al-Aqsa mosque and clashed with stone-throwing Palestinians.

Violence has flared nationwide between Jews and Arabs, a 20 percent minority. Synagogues, mosques, graveyards, a theatre and restaurants have been targeted, and at least one man has died.

A 12-year-old Muslim boy was hospitalised after a firebomb was thrown into his home, an attack that led to an unnamed suspect’s arrest Monday. Fearful Muslim neighbours were quick to take down their Ramadan decorations.

The root causes for the latest spasm of violence go back decades. In Jaffa, an assault last month gave an early warning of long-simmering tensions over land and property rights.

‘They want to throw us out’

Israa Jarbou shares a cramped public housing apartment with nine others including her husband, their two children and her mother-in-law Etaf, 57.

Outside, where their chickens roam, they have seen vast changes in recent years. Low-income Arab neighbours are getting evicted as the housing blocks give way to luxury apartments that mostly Israeli Jews can afford.

The Jarbous, too, face an eviction threat from the state public housing company Amidar, which ordered them to move out in 2018, citing unpaid rent.

Lawyer Saar Amit told AFP he got that eviction cancelled and has requested the company allow the family to stay, or to pay reduced rent in another, citing Etaf Jarbou’s poor health and meagre income. Amidar has not yet replied.

In mid-April, when two men from the nearby Jewish seminary came to her street inspecting land for possible purchase, tensions spiralled into a violent altercation.

The melee was caught on tape, leading to the Jarbou brothers’ arrest.

“They want to throw us out of our home,” said Etaf Jarbou, who claims the two Jewish men came to her house. “And then they say there’s violence. But they’re committing violence against us.”

Moshe Schendowich, head of the Meirim Beyafo seminary, said he and the seminary’s rabbi were inspecting property for building student housing when the two men slapped, beat and kicked them.

“There’s no legitimacy for any type of violence, and this violence was extreme,” Schendowich said.

He and the rabbi, Eliyahu Mali, are affiliated with Israel’s West Bank settlement movement.

Jaffa, Schendowich said, “is not by definition an Arab city.

“For Arab Palestinians it was the capital of education, of theatre, of cinema, schools and newspapers,” he said. “It was a country unto itself.”

Of the more than 70,000 Arab residents then, all but 3,000 fled or were expelled, according to Zochrot, an Israeli group that documents Palestinian communities erased at Israel’s founding.

In Jaffa, the state seized Arabs’ homes, subdivided them and assigned apartments to impoverished Jewish and Arab residents, who paid a symbolic low rent as “protected tenants”.

But change came in the 1980s, when Amidar began selling its properties across Israel, offering protected tenants a chance to buy their homes at a discount.

Amir Badran, a Jaffa native and a member of Tel Aviv’s city council, said most Amidar tenants in Jaffa today are Arab, and more than a third face an eviction threat.

Etaf Jarbou said she gets along with most of her Jewish neighbours.