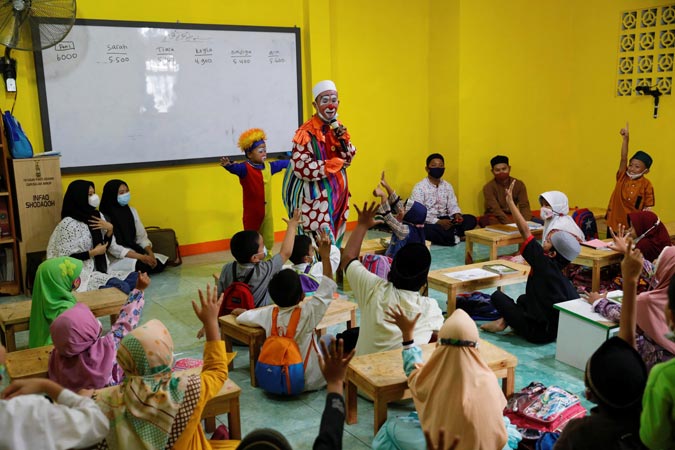 Yahya Edward Hendrawan, an Islamic instructor in Indonesia, dresses up as a clown to attract more children towards learning the holy Quran, Reuters reported.

“When we ask children to recite the Quran, it is a bit difficult,” said Yahya. Children will feel that they are going to the classroom with a purpose if there are clowns around, he added.

Yahya, 38, is a self-dubbed ‘sharia clown’. He teaches at an orphanage clad in a colourful costume and wearing pink and white makeup. Yahya completes his look with a red nose. His five-year-old son Mirza dresses as a clown too, sporting oversized glasses and a wig of orange and yellow. The father and son usually spend an hour to get ready for lessons.

Yahya revealed that he was considered an embarrassment by his late father and pursuing his dream to teach as a clown was not easy.

“His behaviour hurt me so much, it felt like my heart was being cut into slices,” Yahya said. He has always been encouraged by the orphanage’s founder.

Yahya has attracted praise in the community for his enthusiasm to teach and keeping children entertained at the same time.