Gwyneth Paltrow pays tribute to daughter Apple on her 17th birthday: ‘You are so inspiring and just so cool’ 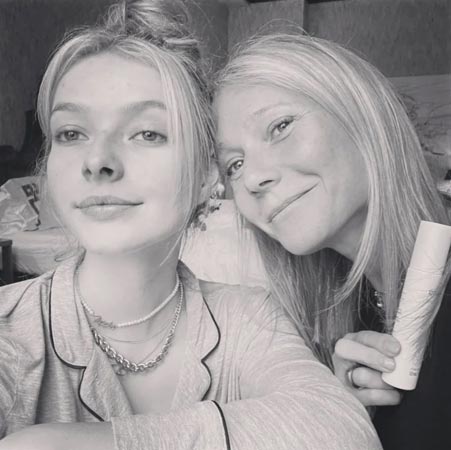 The Sliding Doors actress praised the daughter she shares with ex-husband Chris Martin for being funny, brilliant and hardworking.

“You are fully YOU which I respect and admire so much,” Paltrow wrote. “I wish I had had even a spoonful of the self-acceptance you have when I was your age. You are so inspiring and just so cool.”

She said she remembers the birth of her first-born child “so perfectly.” (Paltrow and Martin also share a son, 15-year-old Moses.)

Apple has been in the spotlight from the start, not only because of her celebrity parents but also because of her unusual name. In fact, Paltrow joked to her ex, “I think we got beat for most controversial baby name,” after Elon Musk and Grimes named their baby X Æ A-12 in May 2020.

Paltrow explained in August 2004 just why she and the Coldplay singer selected the moniker.

“When we were first pregnant, her daddy said, ‘If it’s a girl I think her name should be Apple,'” Paltrow told Oprah Winfrey. “It sounded so sweet, and it conjured such a lovely picture for me, you know. Apples are so sweet and they’re wholesome and it’s biblical.”

While her parents have long tried to keep Apple’s life private, Paltrow has offered a peek at her close relationship with her daughter in the last few years. In April 2020, for instance, the Oscar winner shared a joke Apple made about some of the items offered through Goop, Paltrow’s sometimes controversial lifestyle brand.

Then the teen joined her mom and grandmother, Blythe Danner, in testing out some Goop products in August.

“My daughter likes my style now, which is great because there was a period of time where she thought I was a total loser,” Paltrow said.

But she still doesn’t take Paltrow’s advice when it comes to shopping.