Muslim states slam Israel, and each other’s ties to it

* Delegates at OIC moot turn fire toward Bahrain, Morocco, Sudan and UAE over reaching deals last year to recognize Israel
* Qureshi says it is time to be on right side of history 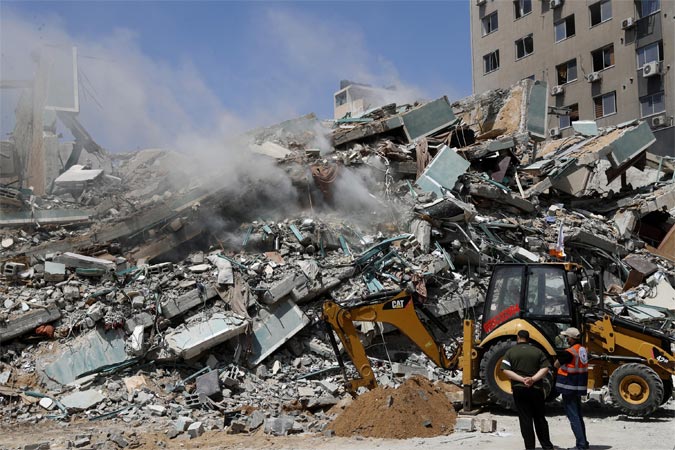 A league of Muslim nations on Sunday demanded that Israel halt attacks killing Palestinian civilians amid heavy fighting between it and Hamas in the Gaza Strip, even as fissures between countries over their recognition of Israel emerged.

A statement by the 57-nation Organization of Islamic Cooperation hewed closely to previous ones issued by the Saudi-based group, including backing the decades-old call for Palestinians to have their own nation with East Jerusalem as its capital. However, recent normalization deals between Israel and some nations in the group – as well as their own concerns about Hamas – saw diplomats at points instead criticize each other.

“The massacre of Palestinian children today follows the purported normalization,” Iranian Foreign Minister Mohammad Javad Zarif said. “This criminal and genocidal regime has once again proven that friendly gestures only aggravate its atrocities.”

The past week has seen some of the worst violence across Israel and the Palestinian territory since the 2014 war in Gaza, with militants launching missiles and Israel pounding the blockaded coastal strip home to 2 million people with heavy fire. At least 188 Palestinians have been killed in Gaza with 1,230 people wounded.

The Organization of Islamic Cooperation statement called on Israel to respect Muslims’ access to Al-Aqsa Mosque, the third-holiest site in Islam, as well as stop settlers from forcibly evicting Palestinian families from their homes.

“The plight of the Palestinian people is the bleeding wound of the Islamic world today,” Afghan Foreign Minister Mohammad Haneef Atmar said.

But the videoconference meeting saw some delegates instead turn their fire toward countries like Bahrain, Morocco, Sudan and the United Arab Emirates, Muslim nations which reached normalization deals last year to recognize Israel. While Egypt and Jordan earlier reached peace deals, supporters of the Palestinians criticized the new countries for recognizing Israel before the formation of an independent Palestinian state.

Turkish Foreign Minister Mevlut Cavusoglu joined Zarif in criticizing the normalization, though Israel maintains diplomatic ties with Ankara. “There are a few who have lost their moral compass and voiced support for Israel,” he said. “If there are half-hearted statements within our own family, how could we criticize others? Who will take our words seriously?”

Hamas, which seized power in Gaza in 2007, didn’t take part in the meeting, which came before consultations at the United Nations over the crisis.

In a resolution adopted by the virtual open-ended extraordinary meeting of OIC’s Executive Committee at level of foreign ministers, the Muslim countries demanded complete and immediate stop of the Israeli attacks that had affected innocent civilians and their properties, in gross violation of international law and United Nations resolutions on the question of Palestine. The OIC warned that the continuation of and incitement to these attacks and provocations increased the risks of instability, with serious implications for security in and outside of the region.

“(The OIC) warns, in particular, against the dangerous effects of Israel’s continued and deliberate inflammation and provocation of the religious sensibilities and feelings of the Palestinian people and the entire Islamic Ummah with its heightened attacks on worshippers, especially starting from the beginning of Ramazan, blocking worshippers’ access to the holy sites to perform their religious rites, including Muslims’ access to the Al-Aqsa Mosque and Christians’ access to the Church of Holy Sepulchre during the Easter celebrations, violent storming of the Al-Aqsa Mosque/Al-Haram Al-Shareef by the occupation forces, terrorising and attacking peaceful worshippers, in flagrant violation of international humanitarian law,” the resolution stated.

The body reiterated its rejection and condemnation of the ongoing Israeli settlement colonisation of occupied Palestinian land, including East Jerusalem and the establishment of racial segregation system there, in particular through the building of settlements, destruction of Palestinian properties and building of an expansion wall, confiscation of lands, homes and properties, forceful expulsion and eviction of Palestinians from their homes and land.

The session demanded a stop to all violations being carried out by Israel, including disrespect for the holy sites, in particular, Al-Aqsa Mosque/Al-Haram Al-Shareef, and not to undermine their historical and legal status.

“Al-Quds Al-Shareef and the blessed Al-Aqsa Mosque, Islam’s first qibla and third holiest sanctuary, is a red line for the Islamic ummah, that only with its full liberation from occupation and its return to the Palestinian people and the Islamic ummah will there be security and stability,” the resolution said.

The Muslim world body reiterated that Israel was an occupation force and did not possess any legitimate right whatsoever on occupied Palestinian land, including East Jerusalem and the Al-Aqsa Mosque/Al-Haram Al-Shareef. All measures undermining its status are null and void and of no legal effect, the resolution said.

The resolution affirmed that all these acts constituted gross violation of international law, attaining the level of war crimes and crimes against humanity for which the occupation must be held accountable and the colonial system boycotted and sanctioned.

The session expressed concern at the rapid pace of the Israeli policy of colonisation of Palestinian lands, especially the threat to forcefully evict hundreds of Palestinian families from their homes in the occupied East Jerusalem, including families in Sheikh Jarrah and Silwan neighbourhoods.

The OIC demanded immediate cessation of those illegal policies and practices that are at variance with the occupation’s obligations under the United Nations Charter, the Fourth Geneva Convention, international human rights law and United Nations resolutions, including Security Council resolution 2334 (2016).

The OIC held Israel fully responsible for the deterioration of the situation and called for the importance of protecting medical and first-aid crews and of allowing them to do their work without hindrance.

The session stressed the need to provide international protection for the Palestinian people, in conformity with international humanitarian law standards as has been repeatedly advocated by the United Nations General Assembly, including in resolution ES-10/20 of 13 June 2018 and in line with the Final Communique of the 7th Extraordinary Islamic Summit, by dispatching an international protection force to save innocent lives from ongoing attacks and terrorism by the occupation forces and the extremist colonialist militias.

The OIC emphasized the UNSC to implement its own resolutions and ensure that they are fully respected, being the foundation and key to a just and lasting solution supported by the prevailing international consensus.

The OIC called upon the international community, including the High Contracting Parties to the Fourth Geneva Convention, to abide by its collective commitments and take measures and steps to compel Israel to fulfil its obligation as occupying authority, including ensuring protection for the Palestinian population.

“The OIC affirmed that “the time has come to take serious measures to hold Israel accountable for its gross violations and to stop exempting it from the same rule that are binding on the rest of the world.”

The OIC noted that the extensive Israeli aggression against the Palestinian people coincided with the 73rd anniversary of the catastrophe, the 1948 tragedy during which widespread ethnic cleansing operation was conducted leading to the forceful removal of 800,000 from their homes and land, after the barbaric massacre carried out in more than 400 Palestinian towns and images by Zionist terrorist groups in Palestine.

It invited member states to make concerted and individual efforts, to rally round and defend Al-Quds and its holy sites, face up to Israel’s crimes, provide the Palestinian people with support and the wherewithal for steadfastness to confront the Israeli barbaric attacks.

The member countries saluted the steadfastness of the Palestinian people on their land and for their historic stand in the face of aggression and occupation.

The OIC decides to move urgently and carry out the necessary contacts to implement this resolution to mandate the Secretary General to contact the President of the European Commission, the United Nations Secretary General, the High Commissioner for Human Rights and other representatives of relevant international organizations and groups to convey the contents of this resolution.

Addressing the session, Foreign Minister Makhdoom Shah Mahmood Qureshi reaffirmed Pakistan’s abiding support for the Palestinians and called for immediate protection of them against Israeli aggression, implementation of United Nations resolutions and an accountability of Israel’s crimes against humanity. He stressed that all necessary steps must be taken for stopping the ongoing aggression against the Palestinian people and their properties. He said the international community must protect the Palestinians against the blatant and illegal use of force and flagrant violations of human rights. “It should urgently intervene and take concerted actions to stop Israeli atrocities against civilian population in Gaza. The bombardment in Gaza must be stopped immediately,” he added.

Foreign minister Qureshi also underlined that implementing forthwith resolutions adopted by the UN Security Council, UN General Assembly and the UN Human Rights Council was both critical and urgent. Israel’s crimes against humanity should not escape accountability, he said, adding, there should be no impunity for Israel’s violation of international law, including the Fourth Geneva and the other various human rights Conventions. “Attempts to create a false equivalence between Israel, the aggressor, and Palestinians, the victims, are inexcusable and as the collective voice of the Muslim Ummah the OIC should work in unity to dispel this deliberately deceptive perception,” a press release quoted the foreign minister.