Covid vaccine registration opens for citizens above 30 years of age 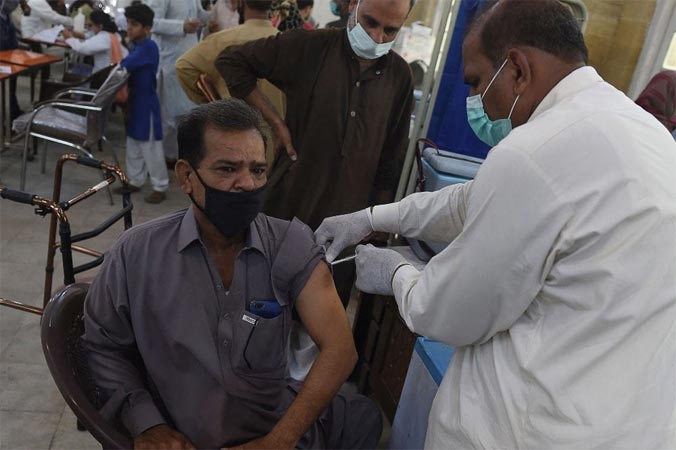 The National Command and Operation Centre said on Sunday that registration of citizens above 30 years of age for Covid-19 vaccines are now open, urging everyone to get vaccinated.

In a tweet, the NCOC said walk-in vaccinations are now open for those above 40 years, but it would require prior registration. Last week, the NCOC had decided to begin registering people between the 30 and 40-year age bracket for Covid-19 vaccines after Eidul Fitr. The vaccines will, however, be administered after a few days, when a significant number of people are registered.

Meanwhile, interprovincial, intercity and intra-city transport with 50 percent passenger occupancy resumed in the country on Sunday after hiatus of about a week. The NCOC has also allowed railways to maintain its operation with 70 percent occupancy.

Regarding business hours, the NCOC allowed markets and shops to remain open till 8:00 PM from Monday (today) onwards. It also allowed normal working hours for offices from 17 May onwards whereas the condition of 50 percent work from home would remain enforced.

The national tally of total active Covid-19 cases on Sunday was recorded at 68,819 as 2,379 new cases emerged in the country. According to the latest update issued by the NCOC, 5,288 patients recovered and 76 lost their lives. Most of the deaths occurred in Punjab, followed by Khyber Pakhtunkhwa.

Currently, there are 4,376 Covid patients under treatment in critical care in various healthcare facilities. The national positivity ratio on Sunday was recorded at 7.82 percent. The maximum ventilators are occupied in four major areas, including Lahore 56 percent, Multan 73 percent, Bahawalpur 46 percent and Peshawar 39 percent. The maximum oxygen beds are also occupied in four major areas of Gujranwala 62 percent, Peshawar 45 percent, Swabi 45 percent and Multan 59 percent. Around 576 ventilators are occupied elsewhere in the country while no Covid affected person was on ventilator in Azad Jammu and Kashmir (AJK), Gilgit Baltistan (GB) and Balochistan.

Around 788,768 people have recovered from the disease so far across Pakistan making it a significant count with over 90 percent recovery ratio of the affected patients.