* 58 children have lost their lives in Gaza so far 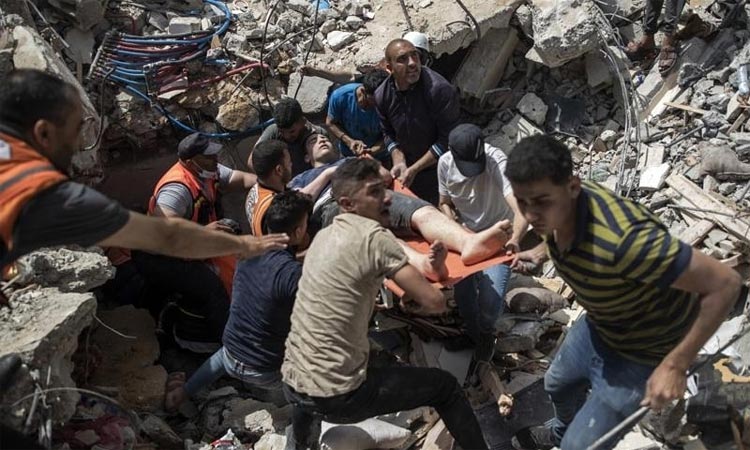 Israeli strikes killed at least 42 more Palestinians in the Gaza Strip Sunday, the worst daily death toll yet in the almost week-long clashes, and also flattened another three buildings.

The heaviest fighting in years, sparked by unrest in Jerusalem, saw the rivals again trade heavy fire, with the death toll rising to 192 in the crowded coastal enclave of Gaza since Monday and at 10 in Israel, according to authorities on either side.

In Gaza, the death toll kept rising as emergency teams worked to pull out bodies from vast piles of smoking rubble and toppled buildings, as relatives wailed in horror and grief. “We were sleeping and then all of a sudden there were rockets raining down on us,” said Lamia Al-Koulak, 43, who lost siblings and their children in the dawn bombardment. “The children were screaming. For half an hour we were bombarded without previous warning. We came out to find the building next door flattened. All the people under the rubble were simple people.”

“The intensity of the conflict is something we have not seen before, with non-stop airstrikes in densely populated Gaza and rockets reaching big cities in Israel,” said the International Committee of the Red Cross. “As a result, children are dying on both sides.”

Pope Francis said the violence risked degenerating further “into a spiral of death and destruction” and said: “Where will hatred and revenge lead? Do we really think we will build peace by destroying the other?”

The bloodiest military conflict in seven years has also sparked a wave of inter-communal violence between Jews and Arab-Israelis, as well as deadly clashes in the occupied West Bank, where 19 Palestinians have been killed since last Monday.

The Israel Defense Forces (IDF) said it had targeted the infrastructure of Hamas and Islamic Jihad, including by pounding a vast tunnel system, weapons factories and storage sites.

Israeli air strikes also hit the home of Yahya Sinwar, head of Hamas’ political wing in the Gaza Strip, the army said, releasing a video showing plumes of smoke and intense damage, but without saying if he was killed.

At least 58 children have lost their lives in Gaza, local health authorities said, more than 1,200 people have been wounded and entire buildings and city blocks reduced to rubble.

The IDF says it takes all possible precautions to avoid harming civilians and has blamed Hamas for deliberately placing military targets in densely populated areas.

Some 10,000 Gazans have fled their homes near the Israeli border for fear of a ground offensive, the UN said, saying they are sheltering in schools, mosques and elsewhere with limited access to water, food, hygiene and health services.

Balls of flame and a cloud of debris shot into the sky Saturday afternoon as Israel’s air force flattened the 13-floor Gaza building housing Al Jazeera and AP news agency, after giving a warning to evacuate.

Al Jazeera’s Jerusalem bureau chief, Walid al-Omari, told AFP: “It is clear that those who are waging this war do not only want to spread destruction and death in Gaza, but also to silence media that are witnessing, documenting and reporting the truth.”

AP President and CEO Gary Pruitt said he was “shocked and horrified” by the attack. Israeli defence officials said the building housed not only news bureaus but offices of Hamas militants.

The latest outbreak of violence began in east Jerusalem last month, when Palestinian protests and clashes with police broke out in response to Israeli police tactics during Ramazan and the threatened eviction of dozens of Palestinian families by Jewish settlers. A focal point of clashes was the Al-Aqsa Mosque, a frequent flashpoint that is located on a hilltop compound that is revered by both Muslims and Jews.

Hamas fired rockets toward Jerusalem late Monday, triggering the Israeli assault on impoverished Gaza, which is home to more than 2 million Palestinians and has been under an Israeli and Egyptian blockade since Hamas seized power from rival Palestinian forces in 2007.