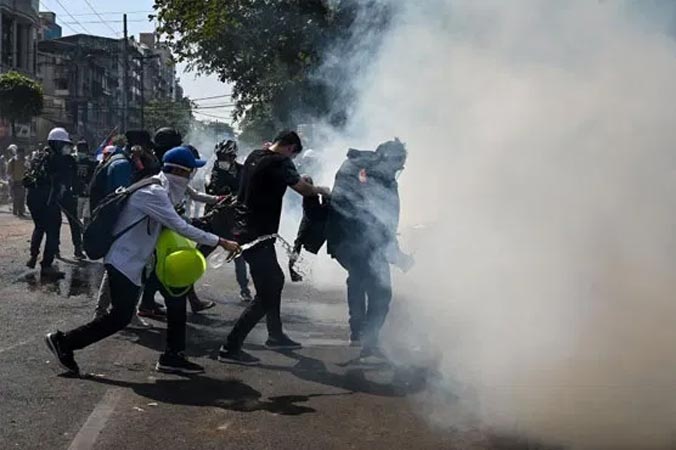 Six opposition rebels have been killed after days of clashes in Myanmar, an anti-junta defence force made up of civilians said Sunday, as Britain and the United States condemned the military’s violence against civilians.

Myanmar has been in uproar since the military ousted civilian leader Aung San Suu Kyi in a February 1 coup, triggering a massive uprising which authorities have sought to quell with lethal force.

Pope Francis on Sunday called for an end to the bloodshed and for people to “keep the faith” in a mass in honour of Myanmar in the Vatican City.

And as security forces deploy live ammunition against civilians, some in the anti-junta movement have set up local militias armed with home-made weapons to protect their towns. In the western state of Chin, the town of Mindat has emerged as a hotspot for unrest, where some residents have formed the Chinland Defence Force (CDF).

“Six members of our CDF who tried to protect the security of the people in Mindat attacked (junta forces) and sacrificed their lives for the national revolution,” said a CDF statement on Sunday.

A spokesman also told AFP that over 10 members have been wounded this week, while five Mindat residents were arrested by the military.

With mobile data blocked across the country, details about the fighting have been slow to come out, and on-the-ground verification is made harder as locals are fearful of retaliation.

The spokesman, who declined to be named, said CDF fighters set fire to several army trucks, destroying them, and ambushed reinforcement troops, while the military has attacked the town with artillery. By Sunday, the CDF had retreated into the jungle, he said.