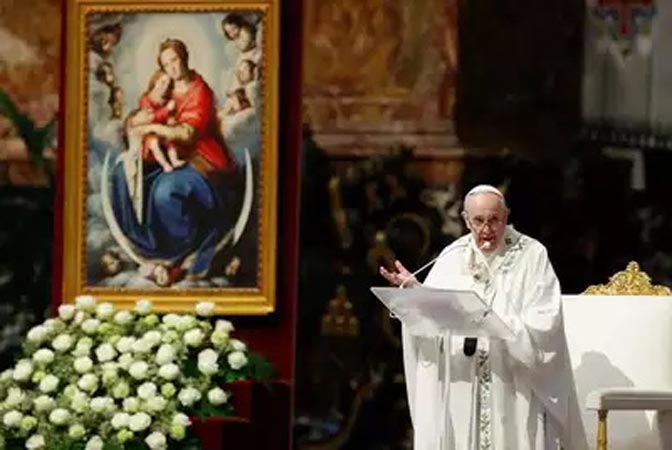 Pope Francis celebrated mass in honour of conflict-ridden Myanmar Sunday, repeating his calls for an end to violence in the country roiled by months of bloodshed.

The mass inside the Vatican’s Saint Peter’s Basilica came after several appeals for peace in recent months by Francis, who visited Myanmar in November 2017, the first papal visit to a Buddhist-majority nation.

A Myanmar nun recited the first reading in Burmese before a congregation of about 200 nuns, priests and seminarians during the mass intended for the country’s Catholics in Rome and beyond.

Myanmar has been in chaos since the military ousted civilian leader Aung San Suu Kyi in a February 1 coup, triggering a massive civilian uprising that authorities have sought to quell with lethal force.

Street protests calling for a return to democracy continue to occur nearly daily, despite the junta’s bloody crackdown having killed an estimated 790 people to date, according to a local monitoring group.

In his homily, Francis, 84, skirted an overt denunciation of the military regime, instead appealing to the faithful to be “steadfast in the truth” and urging them not to lose hope. “Dear brothers and sisters, in these days when your beloved country of Myanmar is experiencing violence, conflict and repression, let us ask ourselves: what we are being called to keep? In the first place, to keep the faith,” he said. The pope appealed for unity, calling division among communities and peoples “a deadly disease.” “Sins against unity abound: envy, jealousy, the pursuit of personal interests rather than the common good, the tendency to judge others. Those little conflicts of ours find a reflection in great conflicts, like the one your country is experiencing in these days.”

There are an estimated 700,000 Catholics in Myanmar, about 1 percent of the population, and in Rome their ranks include students, priests, nuns, lay workers and missionaries. Catholics have been in Myanmar for over 500 years after Portuguese traders introduced the religion from their Indian settlement in Goa. Missionaries arrived in the 18th century.

The February coup by military generals, which ousted the civilian government, has eroded the improved standing that Catholics enjoyed over the past decade in the wake of the 2010 general election. Suu Kyi has remained under house arrest, accused of a raft of charges that could see her barred from politics for life. In his homily, the Argentine pontiff acknowledged “some political and social situations are bigger than we are.” Still, he added, “commitment to peace and fraternity always comes from below: each person, in little things, can play his or her part.”

“Amid war, violence and hatred, fidelity to the Gospel and being peacemakers calls for commitment, also through social and political choices, even at the risk of our lives.”