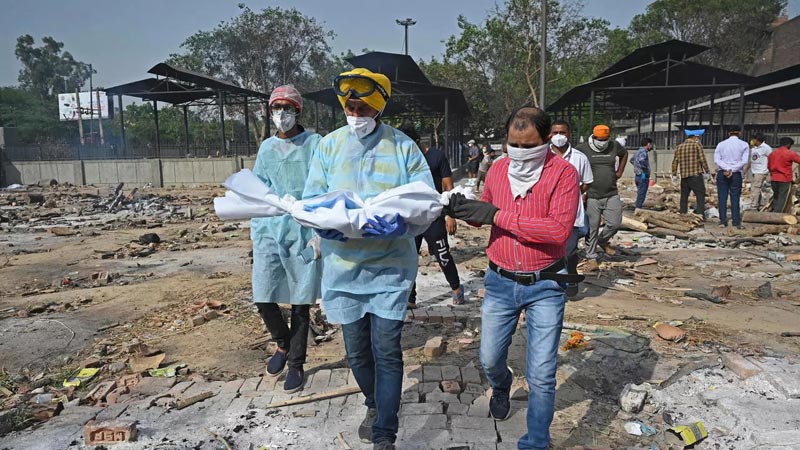 Suneet Sharma has calmly staged dozens of funerals each day of India’s resurgent coronavirus crisis — but he was overwhelmed when a father arrived at the crematorium with the body of his infant daughter.

The 48-year-old volunteers in New Delhi with a Sikh association, one of many groups to spring up around the country and reach across religious traditions to help bereaved families bid farewell to their loved ones.

The arrival of bodies at cremation and burial grounds has been unrelenting in recent weeks and teams work long hours under the summer heat, sometimes in full protective gear to reduce their exposure to the virus.

Like Sharma, the volunteers from different faiths are willing to take on the emotional and physical toll of carrying out the final rites, driven by a sense of duty.

“We are doing it for… mankind, for humanity. That’s all. Sometimes it’s very, very painful,” the 48-year-old told AFP.

Behind him, smoke curled up from crackling funeral pyres and family members of victims stood silently in protective suits.

“We are used to cremating 50 bodies a day, but we never cry. Today, I saw a little girl. Today, we cried,” he said.

Sharma sleeps in his car at night and has not seen his family for two months, fearful that he could spread the virus to them.

Syed Ibrahim, a volunteer with a Muslim charity group in the southeastern city of Chennai, is also aware of the risks.

“Of course I’m scared. This is an extremely contagious disease,” he told AFP.

“In our religion, it’s said that God has destined certain things for us… so we bravely take care of the burials and anything else people need from us.”

The skyrocketing cost of ambulances has meanwhile led the “Mercy Angels” — a group of Christian, Hindu and Muslim volunteers in Bangalore — to help poor families transport bodies to cemeteries and crematoriums.

They prepare graves and offer final prayers according to the religious customs of the dead.

“We serve… everybody, be (they) a Hindu, Muslim or Christian,” driver Mohammed Sadiq told AFP.

Fear of the virus in the world’s second most infected nation — which has recorded more than 262,000 deaths so far, although experts say the actual toll is much higher — has also seen some families shun funerals.

Mahdi Raza, 30, who usually runs a cafe in the northern city of Lucknow and had been fasting during Ramadan, has buried hundreds of Covid-19 victims since the start of the pandemic last year.

But in the past few months, he has also received calls for help from non-Muslim communities.

“A body was… lying for eight hours inside a house as family members and neighbours refused to cremate it. Someone finally managed to contact us and we picked up the body and handed it over to the crematorium,” he told AFP.