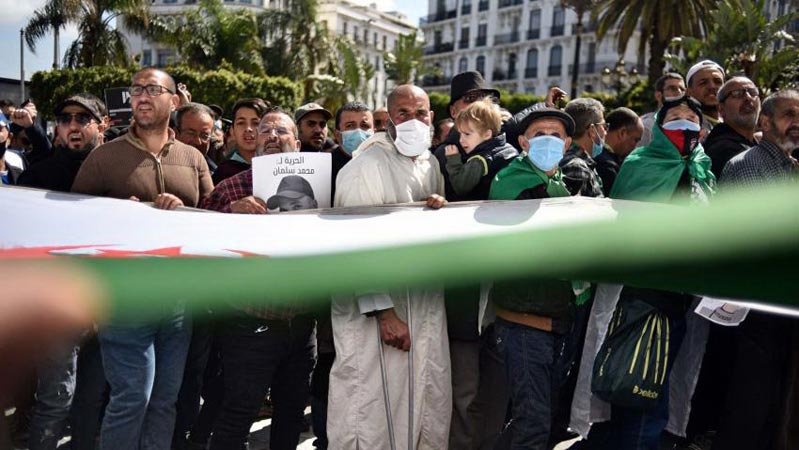 Algerian police prevented a pro-democracy protest rally from taking place in the capital Algiers Friday and detained several people including journalists, among them an AFP photographer, AFP correspondents said.

Demonstrators were preparing to take part in the weekly Hirak movement protest when they were jostled and taken into custody by police in the city centre, an AFP journalist and other witnesses said.

AFP photographer Ryad Kramdi was detained in the working-class Bab El Oued neighbourhood for an identity check and was taken to a police station.

He was released in the evening after eight hours in detention.

“We were well treated but it was very stressful,” Kramdi said after his release.

Around ten other journalists and photographers were also detained, among them Khaled Drareni, correspondent for French-language TV5 Monde and press freedom watchdog Reporters Without Borders (RSF), according to the CNLD prisoners’ rights group.

Some of those detained were released later in the day, including Drareni, according to online media.

Drareni, also the founder of the Casbah Tribune online news site, became a symbol of the struggle for press freedom in Algeria after being incarcerated for almost a year.

“Several journalists were detained and prevented from covering the 117th Friday Hirak protest, while others were manhandled by the security forces,” RSF tweeted.

A video journalist working for Reuters was also said to among the detainees.

A few dozen marchers did manage to hold a protest, chanting “A civil not a military state”.

Marches went ahead in other Algerian cities, including Oran, and in Bejaia and Tizi Ouzou in the northern Kabylia region.

The CNLD reported numerous people taken into custody across the country, from Hirak activists to opposition figures including Mohcine Belabbas, head of the Rally for Culture and Democracy (RCD).

The interior ministry this week said that Hirak protest organisers would have to advise authorities of protests in advance, a move that comes amid mounting government pressure on the movement as elections approach.