* In its own half-hearted style, Netflix's 'Eurovision Song Contest: The Story of Fire Saga' is trying to change all of that 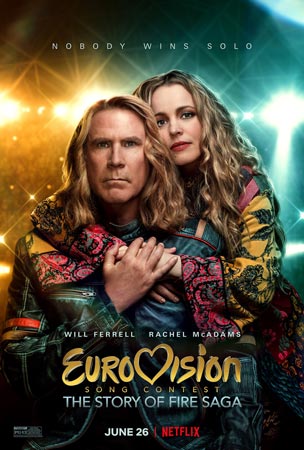 Like efficient railroads or universal healthcare, the annual Eurovision Song Contest is one of those international phenomena that most Americans refuse to acknowledge.

Conceived in the 1950s as a way of bringing Europe together through the magical power of “light entertainment” and copious hairspray, Eurovision has basically evolved into the Olympics of pop music. But despite the fact that the competition has served as a launching pad for global superstars like Abba and Celine Dion, the average American couldn’t seem to care about it any less – we live in the imperialistic bubble of our own cultural-industrial complex, and even in the BTS era it’s hard to remain optimistic about a country that made Three Doors Down into platinum-selling artists while dismissing a visionary like Björk as the weird swan lady who dared to make the Oscars look cool for once. Not for nothing, but “Homogenic” alone has done more good for the world than at least 20 of the United States, and that’s just a historical fact.

In its own half-hearted style, Netflix’s “Eurovision Song Contest: The Story of Fire Saga” is trying to change all of that. A Will Ferrell vehicle produced by a global entertainment powerhouse that has a vested interest in exposing Americans to “foreign” content, this overlong but fitfully amusing three-way between “Blades of Glory,” “Pitch Perfect,” and “D2: The Mighty Ducks” may not do much to teach the history of Eurovision or sell neophytes on its flamboyant allure, but at the very least the movie will put the competition on their radars.

Directed by David ‘The Judge’ Dobkin and shot with all of his usual panache, ‘The Story of Fire Saga’ stars Ferrell as Lars Erickssong, an Icelandic dreamer who’s obsessively wanted to perform at ‘Eurovision’ ever since he was a little boy and the sound of Abba playing ‘Waterloo’ saved him from the depression he suffered after his mom’s death

Directed by David “The Judge” Dobkin and shot with all of his usual panache, “The Story of Fire Saga” stars Ferrell as Lars Erickssong, an Icelandic dreamer who’s obsessively wanted to perform at Eurovision ever since he was a little boy and the sound of Abba playing “Waterloo” saved him from the depression he suffered after his mom’s death. Lucky for Lars, his childhood friend Sigrit has always been a doting partner-in-crime. She’s the only person in the tiny port town of Húsav´ík who believes in Lars, even if that’s just because she’s blinded by her inexplicable crush on him. Together they form the tightest synth-pop duo in all of Norðurþing, even if the local crowd only wants to hear them play their hit novelty song “Ja Ja Ding Dong”. Which is a bummer, because Lars and Sigrit actually have some legitimate bangers up their sheepskin parka sleeves! “Volcano Man” is top-drawer Eurocheese despite its silly lyrics, and it even comes with a music video that winks at Björk’s iconic visuals for “Who Is It?.”

That early gag sets the tone for a comedy that wants to poke fun at Eurovision while still evincing a sincere enthusiasm for the good-natured spectacle of it all; Lars and Sigrit may be clownish Nordic stereotypes who feel like they’re trapped in some kind of ultra-broad Aki Kaurismäki spoof, but they’re not talentless, or even as terrible as the movie sometimes makes them out to be. The script, co-written by Ferrell and Andrew Steele, wants to have its herring and eat it too, and that need to thread the needle between silliness and sincerity prevents “The Story of Fire Saga” from making the most of either approach.

The “Producers”-inspired plot seems primed for a kind of all-out satire that the rest of the movie isn’t always willing to embrace. The gist of it is that Iceland’s cultural committee has a surefire Eurovision contender in a rising pop star named Katiana, but the winning country has to host the next year’s competition. A scheming minister played by “Sex Education” actor Mikael Persbrandt knows that Iceland doesn’t have the infrastructure to welcome half a million visitors. His plan: Find the worst act the country has to offer and let them embarrass themselves on the world stage. It’s not perfect, so far as evil plans go, but there’s no turning back from it once all of Iceland’s other potential Eurovision performers are obliterated in a terrible boat explosion. It seems like Lars and Sigrit are heading to the big show in Edinburgh!

The movie pivots away from taking easy potshots at the Icelandicness of it all once the action switches to the song contest itself, but anyone who’s sad to lose out on those backwater jokes will be relieved to find that “The Story of Fire Saga” just starts aiming its punchlines at other broad caricatures instead. Not that any of the humour is all that pointed; for as often as “Eurovision” feels retrograde, it tends to stop short of malice. The always charming Dan Stevens has a handful of delightful moments as a big-dicked Russian pop star who threatens to pull Lars and Sigrit apart – and that man was just born to be on a stage – but his role’s “hetero flamboyance” shtick makes a lot of the gags feel like self-excused gay jokes. Melissanthi Mahut has an easier go of things as enchanting Greek entrant Mita Xenaxis, a funny-adjacent femme fatale who perfectly intuits the tone of the movie even when Dobkin himself doesn’t seem so sure.

One way or the other, the biggest issue with “The Story of Fire Saga” is that most of it is just too limp and anodyne to register. The various song performances are solid and McAdams never misses an opportunity to remind us that she’s one of her generation’s most gifted comedy stars, but the whole film is inescapably ambivalent to its own premise in a way that can’t hope to sustain two full hours – it’s not absurd enough to support these characters, nor sober enough to reflect what the Eurovision Song Contest means to them, or even what they mean to each other. More than anything, the movie offers little consolation for the fact that, due to the COVID-19 pandemic, this will be the first year since 1956 without a new edition of the competition. Sadly, most of Netflix’s American subscribers won’t know what they’re missing.