‘Arena of men’: The Kosovo women taking on the patriarchy 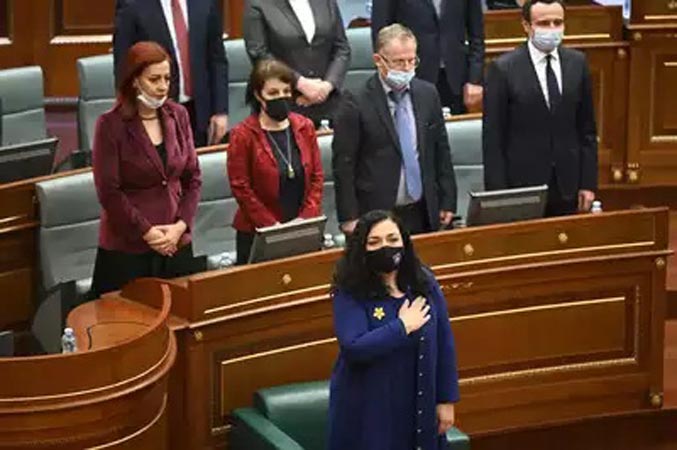 The rape of Vasfije Krasniqi-Goodman was one of thousands during Kosovo’s 1990s war, but she is still the only victim to have spoken out publicly and now is pushing for a radical shake-up of a society long dominated by men.

Krasniqi-Goodman was part of a record intake of women MPs elected to Kosovo’s parliament earlier this year, propelled to power on a wave of anger over domestic violence, lack of economic opportunities and ingrained prejudices.

Europe’s youngest democracy also chose a woman president, chiming with a global push for women to be more involved in public life, embodied by the #metoo movement.

But the climb towards broader equality will be tough in a society steeped in patriarchal protocols and long controlled by male leaders, many of them former rebel fighters.

The latest official data available which dates from 2014 showed that just 15 percent of women owned property, while the Kosovo Women’s Network NGO reported in 2019 that only 12.6 percent of women had a job.

The NGO said women were expected to stay at home and raise children rather than go out to work.

In a society where rape is viewed as a stain on the family’s honour, Krasniqi-Goodman campaigns against the stigma that keeps many victims from coming forward.

“I am the voice of survivors of sexual violence but the sphere of my fight is widening,” she told AFP in an interview before the February election, promising to get involved in all gender and rights issues.

With her family’s support, Krasniqi-Goodman first publicly acknowledged her rape in 2017 when she posted an open letter to her rapists on her Facebook page.

She said that at the age of 16 she was taken at gunpoint from her home and raped by two Serbs, one of them a policeman, in 1999.

Official estimates suggest that as many as 20,000 women were raped during the 1998-1999 conflict between ethnic Albanian guerrillas and Serbian forces that led the former Serbian province to declare independence.

Only Krasniqi-Goodman has spoken publicly of the trauma and nobody here or in Serbia has been convicted in her case, or for any other wartime rape in Kosovo.

Now 38, she has spent the past 20 years in the United States but has returned to Pristina to take her seat in parliament.

“I am leaving my life in America to make my contribution to Kosovo,” she said, pledging projects for women that will “really improve their lives”.

Krasniqi-Goodman was among 43 women MPs voted into the 120-seat chamber, the highest proportion in Kosovo’s short history.

Vjosa Osmani, a 38-year-old law professor, emerged as the most popular politician with some 300,000 votes — no mean feat in a territory of just 1.8 million people.

She has since become Kosovo’s second female president after overcoming resistance from some MPs, and told parliament: “Women have the right to be where they want to be.”

Struggling to hold back tears, she added: “Don’t stop, don’t stop moving forward. All your dreams can come true.”

Her election as president shows that politics is “not just the arena of men”, gender researcher Luljeta Demolli said.

Almost immediately, however, Osmani was thrust into a sexism controversy when another MP posted on Facebook a description of an Ottoman-era female official as having “a bucket-like belly” and a “swollen red face like a pepper”.

Ardian Kastrati, who also works as a politics professor at Pristina University, removed the post after it started generating a backlash and claimed it was not referring to Osmani.

But many did not believe him, with dozens of students calling for him to be sacked from his university post.

The fight for equality is made all the more difficult by the dire economic situation in one of the poorest parts of Europe, where the average monthly salary is 500 euros ($600).

“We live in a country that is super poor and where husbands are also victims of poverty, so they develop an oppressive mentality towards those who have even less — unfortunately that means women.”

Even highly qualified women find it hard to get a job that matches their talents.

A business management graduate from Pristina, who did not want to be named, told AFP that she had endured years of bullying at the hands of men while she tried to make it in her chosen profession.