Neither injustice nor NRO to Tareen: PM

g PM says no talks with India unless it goes back to pre-Aug 5, 2019, position on IIOJK 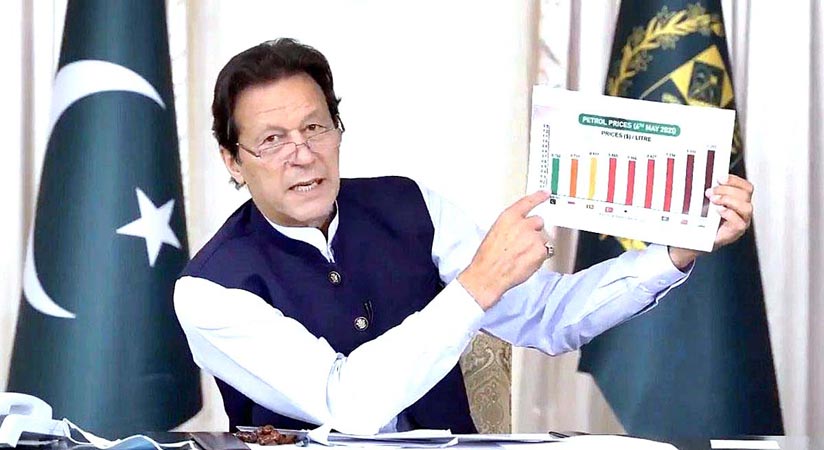 Prime Minister Imran Khan Tuesday said it is his prime goal to make Pakistan a great nation by making the corrupt and powerful mafia accountable before law.

“To make the powerful accountable before law is a Jihad. We will make the corrupt political leaders and mafias surrender before rule of law,” the prime minister said in a live telephonic call session with the general public. However, he said he has not done injustice with Jahangir Tareen, while also denying that he had given any NRO to the estranged PTI leader who is facing an inquiry by the Federal Investigation Agency (FIA) related to the sugar scam. “Tareen claimed he is a victim of injustice. I have never done any injustice with anyone. When I haven’t done it with any of my opponents, how will I do it with Jahangir Tareen?” the prime minister said. “However, I will never give an NRO to people who were part of the sugar mafia and caused trouble for the people,” he vowed, adding that these mafias did not pay taxes and raised sugar prices whenever they wanted to.

He mentioned that the sugar mafia by one rupee (per kilogram) price increase extorted Rs 5 billion from the pockets of masses. “The sugar industrialists paid Rs 22 billion as tax in five years but got Rs 29 billion on account of subsidy. There will be no concession with any mafia,” he said. “I am answerable to Almighty Allah. How can I put the poor in jails and set the powerful free?” he asked.

The premier said Shehbaz Sharif had a money laundering case worth Rs700 billion against him. “This is just one case, [authorities] have a book’s worth of cases against him. The only time (the stolen) money comes back is when one of the wives or sons have to buy a house. Now, if you gather all Pakistani prisoners who have stolen, all their thievery combined is not equal to Rs700bn.”

He claimed that because of the two NROs given by former president Pervez Musharraf to Asif Ali Zardari and Nawaz Sharif, the country’s loans had mushroomed from Rs6 trillion to Rs30 trillion. “This is what has destroyed the country. I have always said I would not give an NRO and I am saying it again today.”

Imran Khan asked the public to report cases of illegal land grabbing directly to him and mentioned that the government had cleared 21,000 acres of land worth Rs 27 billion from such mafia. He recalled that PML-N leader Maryam Nawaz sided with a land grabber when the government cleared the state land from his illegal occupation after thorough investigation into the records.

The prime minister said his government does not interfere with the working of judiciary and National Accountability Bureau (NAB) as it wants the rule of law in its true spirit.

When a caller asked Prime Minister Imran whether he was happy with his ministers, the premier said: “I have 11 players in my team, some of them are very good. If [the ministers] are not good, they will be thrown out of the team.”

Imran Khan said cartels and monopoly as witnessed in the case of sugar mills resulted in inflation. The appointment of Shaukat Tarin as finance minister aimed at controlling inflation and increasing the growth rate, he added.

On petroleum prices, he said the government had kept the price of commodity lower as compared to India, Indonesia, Sri Lanka, China, United States, Turkey, Malaysia, Bangladesh and Bhutan so as to avoid burden on consumers. On the issue of Kashmir, the prime minister categorically stated that Pakistan would not resume talks with India till its restores the special status of the occupied valley. “Unless India reverts its August 5, 2019, action, Pakistan will not hold talks,” he said.

Imran Khan said the Hindu supremacist ideology of the ruling Bharatiya Janta Party of India is being condemned at the international level. He lauded the role of Pakistan’s Foreign Office in leading a full campaign to highlight the Kashmir issue globally.

Imran Khan appealed to the nation to fully follow precautions to contain the spread of third wave of coronavirus, particularly during the Eid holidays. “I request you to follow the Standard Operating Procedures and particularly use face masks. Take care of your elderly so as to avoid lockdown,” he said. Imran Khan announced establishment of a dedicated portal for the overseas Pakistanis to be headed by the foreign minister, where complaints could be lodged directly if an embassy or foreign mission did not respond to their pleas. He said the portal would be advertised soon where a special officer would be working under the foreign minister as a focal person to deal with the complaints.

He mentioned that the Foreign Office was working well in the area of diplomacy. The government was focusing on two areas – consular services and attracting foreign investment. He, however, admitted that his recent interaction with the diplomats deployed at missions abroad, where he had pointed out the shortcomings, should not have gone on air for public consumption. Prime Minister Imran Khan said with solid steps, the government had achieved remarkable economic growth in diverse sectors. Through reforms the economic losses of public corporations had been reduced from Rs 286 billion to Rs 143 billion, the current account deficit remained in surplus for the last 10 months and the foreign exchange reserves increased to $15.6 billion. “During the pandemic situation when the whole world is facing financial crunch, our government has saved the economy,” he said. He acknowledged that the financial assistance from Saudi Arabia and China also helped Pakistan gain the economic stability. Imran Khan said incentives in the housing sector had encouraged economic activity and the banks were offering loans for the construction of houses. He acknowledged the role of courts in the passage of foreclosure law of banks, which, he said, had greatly helped in materialization of the low-cost housing project. Imran Khan said smuggling was a big problem at the borders with Iran and Afghanistan. The smuggling of Iranian petrol, that was earlier causing huge financial loss, had been completely stopped at the border, he added. He said the establishment of markets at both borders would encourage the traders to involve in economic activity and refrain from smuggling.

Responding to a caller, who complained to the prime minister of leaving Karachi at the mercy of provincial government, Imran Khan said following the 18th Constitutional Amendment, around 57 percent of resources were directly going to the provinces. The federal government, however, was ready to provide assistance to the province, he said and announced that a Sindh package had been prepared for its development.

The prime minister strongly condemned the Israeli atrocities carried out on 27th Ramazan against the innocent Palestinians and stressed joint efforts of the Muslim nations to highlight the issue at international level.