* His statement comes as numerous stars in Hollywood have criticised the HFPA for its lack of Black representation within the group, which votes on the Golden Globe winners 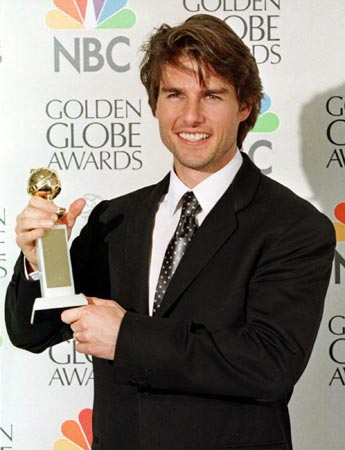 Tom Cruise has reportedly given back his three Golden Globe statues to the Hollywood Foreign Press Association, following outrage against the annual award show’s organisers.

Multiple outlets report that Cruise, 58, returned his Best Actor trophy for Jerry Maguire, Best Actor trophy for Born on the Fourth of July and Best Supporting Actor trophy for Magnolia. His statement comes as numerous stars in Hollywood have criticised the HFPA for its lack of Black representation within the group, which votes on the Golden Globe winners. On Monday, NBC announced it will not air the 2022 Golden Globes. An NBC spokesperson told E! News in a statement, “We continue to believe that the HFPA is committed to meaningful reform. However, change of this magnitude takes time and work, and we feel strongly that the HFPA needs time to do it right.” The statement went on, “Assuming the organization executes on its plan, we are hopeful we will be in a position to air the show in January 2023.”

The Golden Globes has aired on NBC since 1996.

A February investigation by the Los Angeles Times revealed the HFPA’s 87 members included no Black journalists. At the 2021 ceremony, HFPA members Helen Hoehne, Meher Tatna and Ali Sar took the stage to address the diversity issue and share their hope for a “more inclusive future.” As Hoehne said, “Tonight, while we celebrate the work of artists from around the globe, we recognise we have our own work to do… Like in film and television, Black representation is vital.”

Tatna added, “We must ensure everyone from all underrepresented communities gets a seat at our table and we are going to make that happen.” Sar said he wanted to create an “environment where diverse membership is the norm, not the exception.”

In response, Netflix chief Ted Sarandos wrote a letter to HFPA’s Leadership Committee, vowing that the streaming platform would be “stopping any activities” with the body “until more meaningful changes are made,” according to Deadline.

HFPA president Ali Sar wrote back to Sarandos in a letter published by The Hollywood Reporter on May 7. “We can assure you that our plan reflects input from our supporters and critics alike, and we truly believe that our plan will drive meaningful reform and inclusion within our Association and in a way that the entire industry can be proud of,” it read in part. “We are proud that our plan was overwhelmingly approved by more than 90 percent of the membership-there is no question the membership is embracing this opportunity.”

E! News has reached out to Cruise’s rep for comment, as well as the HFPA.