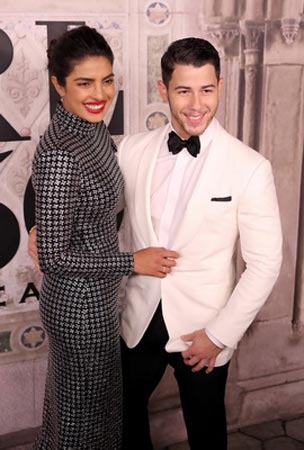 American pop singer Nick Jonas recently opened up about his ‘kind of a proposal’ he made when he met Bollywood actress and his wife Priyanka Chopra for the very first time in an interview with a leading men’s magazine.

The 28-year-old recalled that he got down on one knee when he met his ladylove and asked her where she had been for all his life. When asked if he proposed to Priyanka the first time he met her, he told GQ Magazine, “Kind of. It was a sort of proposal. I did get down on one knee and say, “Where have you been all my life?” But I didn’t say, “Will you marry me?” That came much later”.

In the same interview, Nick also revealed his feelings on being considered a sex symbol. The musician said that he felt flattered by the label, however, he tries not to think about it as it makes him feel embarrassed.

He said, “Er, I think it’s flattering, but attraction is such a nuanced thing. I don’t take it too seriously. I just learn to laugh about it and think about the fact that my parents are probably reading some of the comments. It’s not something I wear as a badge of honour. I tend to try to not think about it, because it would make me feel a little embarrassed.”

On March 12, the 28-year-old singer released his solo album Spaceman and has admitted to the media that the songs in it are kind of love letters written for his wife, who was away from him for six weeks last year, fulfilling her work commitments. The lovebirds – Nick Jonas and Priyanka Chopra tied the knot at the Umaid Bhavan Palace in Jodhpur in 2018.