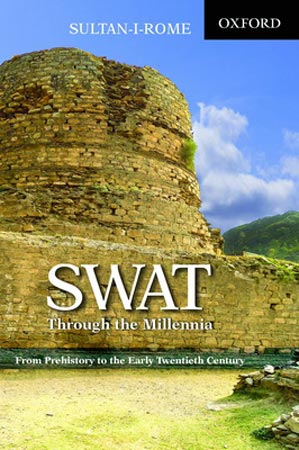 SWAT THROUGH THE MILLENNIA: FROM PREHISTORY TO THE EARLY 20TH CENTURY BY SULTAN-I-ROME — beginning with details of its nomenclature and geography, the book continues with covering and thoroughly examining and discussing the prehistory and protohistoric periods of Swat, different aspects of Alexander of Macedonia’s invasion, the period from the Mauryas to the Hindu Shahis, religious perspective of Swat, Muslims’ occupation and pre-Yusufzi’s period, the Yusufzi’s occupation, their social system and mode of ruling, the Mughals and Swat, Khushal Khan Khattak and Swat, the period from 1707 till 1915 ce, and the Kuhistan. There is very little about Swat, from the said perspectives, that cannot be learned from reading this book. The book is comprehensive, and systematic. Written in an analytical but simple style, and presented methodologically, it is rich in factual information. It is heavily based on primary source material; but the respected secondary sources are also utilized. A sister volume of the title Swat State, the present volume details the above topics and themes in the regional, international, geopolitical and strategic contexts of the periods concerned. It enables the reader to gain the kind of knowledge that might have required the reading of a number of separate books. 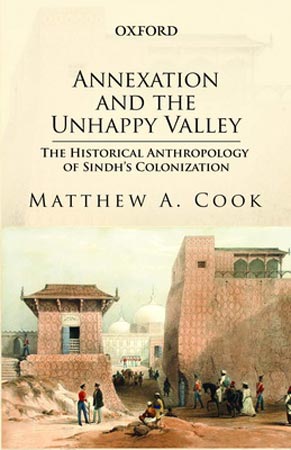 ANNEXATION & THE UNHAPPY VALLEY: THE HISTORICAL ANTHROPOLOGY OF SINDH’S COLONISATION BY MATTHEW A COOK — annexation and the Unhappy Valley: The Historical Anthropology of Sindh’s Colonization addresses the nineteenth century expansion and consolidation of British colonial power in the Sindh region of South Asia. It adopts an interdisciplinary approach and employs a fine-grained, nuanced and situated reading of multiple agents and their actions. It explores how the political and administrative incorporation of territory by East India Company informs the conversion of intra-cultural distinctions into socio-historical conflicts among the colonized and colonizers. The book focuses on colonial direct rule, rather than the more commonly studied indirect rule, of South Asia. It socio-culturally explores how agents, perspectives and intentions vary-both within and across regions-to impact the actions and structures of colonial governance. 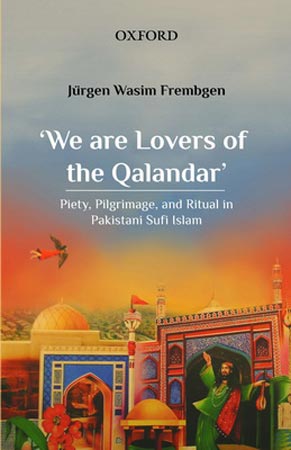 NO-WIN WAR: THE PARADOX OF US-PAKISTAN RELATIONS IN AFGHANISTAN’S SHADOW BY ZAHID HUSSAIN — this book explores the post-9/11 relations between the US and Pakistan. The growing divergence between Washington and Islamabad has taken an already uneasy alliance to a point of estrangement. Yet, a complete breakup is not an option. The underlying cause of the tension, within the partnership the two had entered on 13 September 2001, has never been fully understood. What is rarely discussed is how Pakistan’s decision to ally itself with the US pushed the country into a war with itself; the cost of Pakistan’s tight roping between alignment with the US and old links with the Afghan Taliban; and its long-term implications for the region and global security. This book elucidates implications for Afghanistan in the so-called war on terror while revealing US and Pakistan’s foreign policy initiatives. The author explores all this through little known facts and through the players involved in this cloak and dagger game. The book tells the story behind the headlines: how equivocal is ISI’s break with the Afghan Taliban fighting the coalition forces in Afghanistan; the shootout in Lahore involving a CIA agent; and the killing of Osama bin Laden. 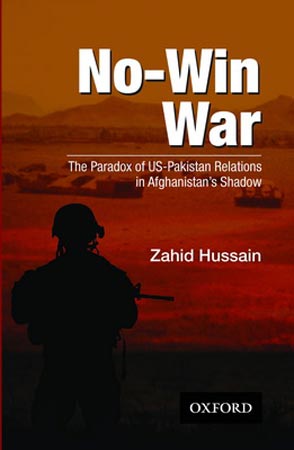 WE ARE LOVERS OF THE QALANDAR: PIETY, PILGRIMAGE & RITUAL IN PAKISTANI SUFI ISLAM BY JURGEN WASIM FREMBGEN — this book is about Pakistan’s most popular Sufi saint Lal Shahbaz Qalandar whose shrine in Sehwan Sharif is one of the most fascinating sanctuaries in the Muslim world. At the time of pilgrimage, this flourishing cult centre becomes a vibrant place of ecstatic religiosity marked by intense forms of devotion. The present ethnographic study is organized around three themes: piety, pilgrimage, and ritual. Thus, its focus is first on visual culture and ‘material religion’ as well as various aspects of religious aesthetics which highlight how sacred spaces are constructed and shaped. Secondly, it deals with the year-round pilgrimage, mainly investigating pilgrims from Punjab, but also discussing remarkable ritual agents in the cult. The third theme is the spectacular trance dance known as dham?l. On February 16, 2017, a suicide bomber executed a horrible massacre among the dancing devotees. This work, which is the fruit of the author’s field-research between 2003 and 2015 in Sindh and Punjab, aims to contribute to a ‘Sufism observed’ which often seems to be neglected in mainly text-based Sufi studies. It is an academic companion to his earlier At the Shrine of the Red Sufi. 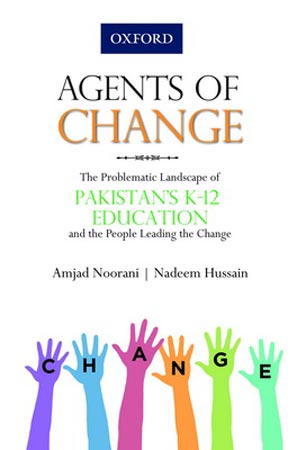 AGENTS OF CHANGE: THE PROBLEMATIC LANDSCAPE OF PAKISTAN’S K-12 EDUCATION & THE PEOPLE LEADING THE CHANGE BY AMJAD NOORANI & NADEEM HUSSAIN — Agents of Change is a compilation of thought-provoking insights, opinions, personal stories, and suggested actions for change in the K-12 education system in Pakistan. It validates how good schooling can alleviate poverty and advance societal development through equitable opportunity for quality education. Clear and precise proposals are offered for reforms in the Pakistani context. Thoughtful analyses are based on sound research, conversations in the education community, interviews with experts in the field, and first-hand knowledge of the many challenges in the education system. There is also a Call to Action for broader public support and civic leadership to oversee the reforms. The authors argue that it will take greater public participation and strategic political advocacy to chip away at the problems. The case is made that the TCF* model of quality education and efficient management at a large scale offers a template for improvements in the education system. The Citizens Foundation (TCF) is a Pakistani non-profit that operates 1,650 schools, including 300 adopted public schools.