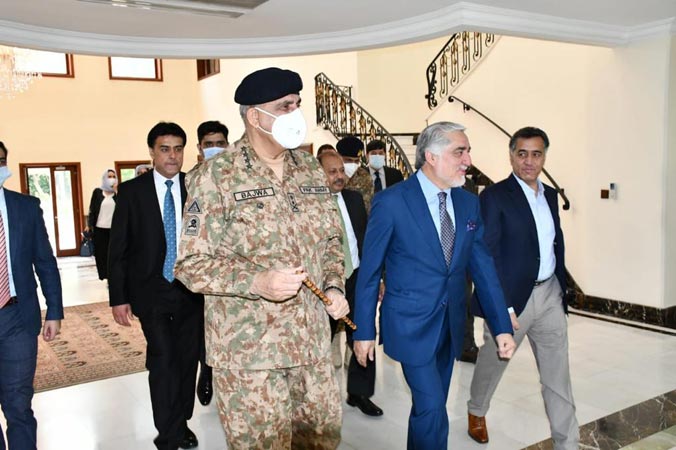 The Inter-Services Public Relations (ISPR) said General Bajwa held meetings with Afghan President Ashraf Ghani and Chairman of the High Council for National Reconciliation of Afghanistan Dr Abdullah Abdullah. Matters of mutual interest, current developments in Afghan peace process, enhanced bilateral security and defence cooperation and need for effective border management between the two brotherly countries were discussed. “The COAS reiterated that a peaceful Afghanistan means a peaceful region in general and a peaceful Pakistan in particular. We will always support Afghan led-Afghan-owned peace process based on mutual consensus of all stakeholders,” according to the statement. The Afghan president thanked the COAS for a meaningful discussion and appreciated Pakistan’s sincere and positive role in Afghan peace process. General Sir Nicholas Patrick Carter, Chief of Defence Staff UK, was also present during the meeting.

Peace process, bilateral relations between Pakistan and Afghanistan and Pakistan’s role in an end to violence in Afghanistan were discussed. On his part, President Ghani insisted that the role of regional countries and particularly Pakistan in the establishment of peace is very important. “Both neighbouring countries have no other option but to show respect to each other, maintain good neighbourhood and boost economic cooperation,” a statement from the Presidential Palace quoted Ghani as saying. He said there is no military solution to the Afghan conflict and the Taliban push for a military solution is unacceptable to Afghans and that Afghan nation wants a just and durable peace through negotiations.

Ghani called stability of both countries inter-linked to each other and demanded Pakistan’s effective role in the establishment of durable peace in Afghanistan. Dr Abdullah said in a series of Tweets that both sides focused on the current state of the Afghan peace process and on ways to build and accelerate momentum toward reduction in violence leading to a permanent ceasefire and continued inter-Afghan talks. “Agreeing that there is no military solution to the Afghan crisis, we stressed on the restart of meaningful talks between the GoIRA (government of the Islamic Republic of Afghanistan) & Taliban by aiming for an inclusive & comprehensive political settlement,” he said. Abdullah said Gen Bajwa assured that Pakistan supports an inclusive power-sharing arrangement and elections as a right of Afghans to self-determination. “I pointed out that the Taliban have yet to fully use this unique opportunity for talks and peace. Any attempt to use force will worsen the stalemate and shore up public opposition,” Abdullah said. He appreciated a constructive Pakistani role and urged all sides to aim for what is possible as to take steps toward a durable, just and acceptable political settlement.

Meanwhile, Pakistan on Monday welcomed the three-day ceasefire announced by Taliban in Afghanistan on the eve of Eidul Fitr. “We fully support all efforts that lead to reduction in violence and contribute to achieving durable stability and lasting peace in Afghanistan,” the Foreign Office said.

The Taliban declared a three-day ceasefire across Afghanistan to mark this week’s Eidul Fitr holidays.