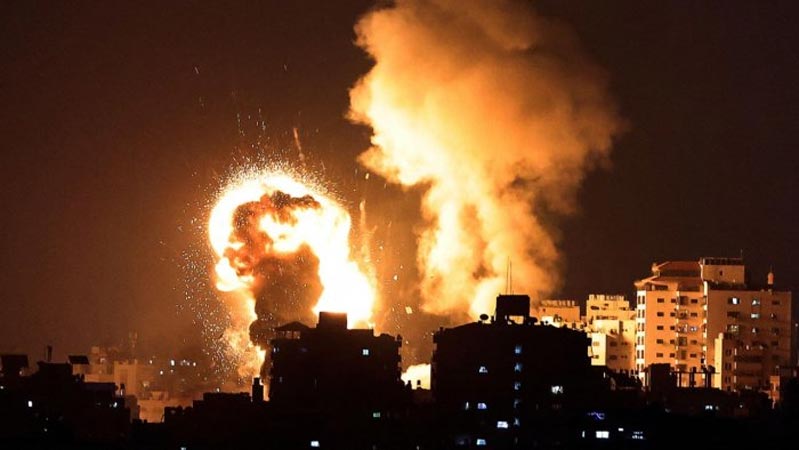 Adding to the sense of chaos, a huge fire engulfed trees in the compound that houses the mosque, Islam’s third holiest site, and the Temple Mount sacred to Jews. At least 20 people were killed in Gaza – among them a senior Hamas commander – local authorities said. But it was not immediately clear whether they all died in Israeli strikes or from a misfired Hamas rocket.

“We have started, and I repeat started, to attack military targets in Gaza,” Israeli army spokesman Jonathan Conricus told reporters. He said Israeli forces had targeted “a Hamas military operative,” while Hamas sources in Gaza confirmed to AFP that one of their commanders, Mohammed Fayyad, had been killed.

Conricus said he could “neither confirm nor deny” that its strikes caused all the nine fatalities, adding it may have been an “internal matter”.

Tensions in Jerusalem have flared since Israeli riot police clashed with Palestinian worshippers on the last Friday of holy month of Ramazan in the city’s worst disturbances since 2017. Nightly unrest since then at the Al-Aqsa compound has left hundreds of Palestinians wounded, drawn calls for de-escalation from the international community and sharp rebukes from across the Muslim world.

Hamas, which controls the Gaza Strip, Monday warned Israel to withdraw all its forces from the mosque compound and the east Jerusalem district of Sheikh Jarrah, where looming evictions of Palestinian families have fuelled angry protests. Sirens wailed across Jerusalem just after the 1500 GMT deadline set by Hamas as people in Jerusalem, including lawmakers in the Knesset legislature, evacuated into bunkers, amid warnings over loudspeaker in Hebrew and English.

The Israeli army said seven rockets were fired from the coastal strip into Israel, two of which were intercepted by Israel’s Iron Dome anti-missile defence system and three of which fell onto vacant lands.

A spokesman for Hamas’ armed wing the Qassam Brigades said that “a volley of rockets was fired towards the enemy in occupied Jerusalem in response to its crimes and aggression on the holy city and repression of its residents in Sheikh Jarrah and the Al-Aqsa mosque”. “This is a message that the enemy must understand well: if you respond we will respond, and if you escalate we will escalate.”

A house in Beit Nekofa, about 10 kilometres west of central Jerusalem, was also damaged by rocket fire, AFP TV reported. The Israeli army said on Twitter that, separate to the rockets, “as a result of an anti-tank missile fired from Gaza, an Israeli civilian in a nearby vehicle was lightly injured” in the Gaza border area.

Fears of further chaos in the Old City had temporarily eased when Israeli organisers of a march to celebrate the Jewish state’s 1967 capture of east Jerusalem cancelled the event. But then came the Hamas warning, followed by the rockets.

In Monday’s Al-Aqsa clashes, as during the previous nights since Friday, Palestinians hurled rocks at Israeli officers in riot gear who fired rubber bullets, stun grenades and tear gas. Loud booms and angry screams echoed from the ancient stone walls of the compound, where Palestinians built makeshift barricades and the ground was littered with rocks, stun grenade fragments and other debris.

The Palestinian Red Crescent put the toll from Monday’s clashes at 331 injured, including more than 200 who were hospitalised, five of them in critical condition. The Israeli police reported nine injuries in their ranks.